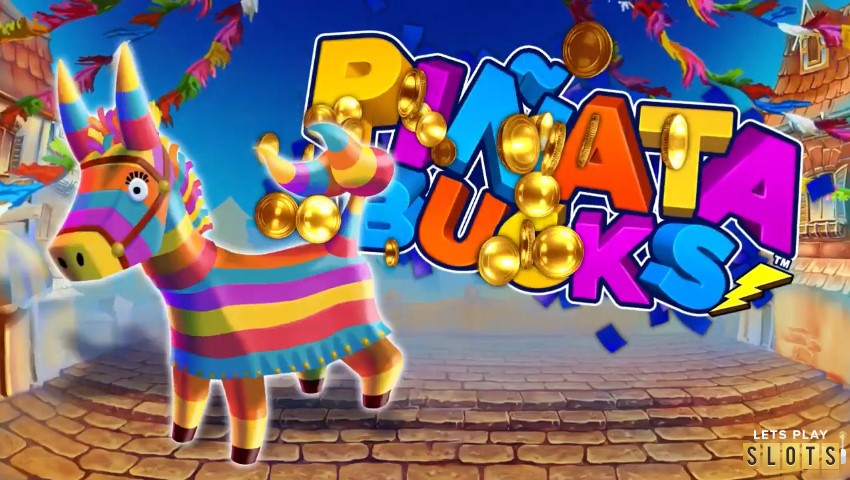 Piñatas are one of the prime things that are associated with Mexico, so why not have fun with this Piñata Bucks slot game from Incredible Technologies. It’s got a unique layout, incorporates 1296 ways to win and has wild symbols, a bonus round and more. 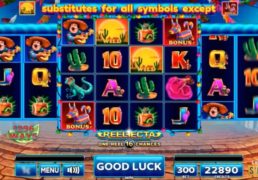 Having never managed to experience what it’s like to have a piñata myself, it’s quite the intriguing experience to play a game that bases itself around the theme. Piñata Bucks from Incredible Technologies has a lot for players to enjoy, starting with its very vibrant colour scheme and intriguing layout. More on that a little bit later. You see, the game also incorporates some thoroughly pleasing special features. 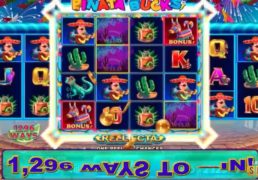 The main game has a layout that consists of eight reels in total, but these are designed with different rows. So, the row layout is of 3x3x4x4x4x4x3x3. Got it?  The reels are spin at the same time and feature the same standard symbols on them. Across this setup, you’ll have a total of 1296 ways to win.

Upon the reels, you’ll see various different symbols, starting with the often-used playing card additions from 10 through to A. They are joined by various thematic symbols, which are the cactus, the bottle of tequila, the gecko and the mariachi guitar player.

The game also has the inclusion of a sunset symbol, which is its wild offering. This one will stand in for all other icons, helping to form winning combinations. The only exception to this is the bonus icon. 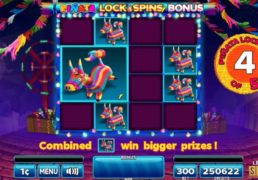 The bonus symbol that appears in this slot is, of course, the piñata itself, which is in the shape of a donkey. Whenever six of these appear across the reels, the bonus round begins. This is known as the Piñata Lock Spins Bonus feature. You’ll receive five of these spins, with the donkey piñata locking in place when it appears and growing bigger to win greater prizes, jackpots and even progressive jackpots! Any of these that don’t grow can be hit afterwards to reveal credit amounts.

Speaking of the progressive jackpots, you will then hit one of the 3×3 piñatas – if you manage to enlarge one to this size – and you could win a huge jackpot amount or the Minor, Major or Grand progressive.

The amount of fun that I had when playing this slot game from Incredible Technologies was just about second-to-none. The theme shines through with top-quality graphics and the inbuilt features make it all the more playable. Plus, with the chance to win a progressive jackpot from playing it, what more could a gamer want?

Piñatas are one of the prime things that are associated with Mexico, so why not have fun with this Piñata Bucks slot game from Incredible Technologies. It’s got a unique layout, incorporates 1296 ways to win and has wild symbols, a bonus round and more.

Hurray! There is a competition going between users of our site!
You have to do nothing, but browse out site, and win a daily prize. Click here to read more.
You current ranking:
Time Left: 1h 34m 19s