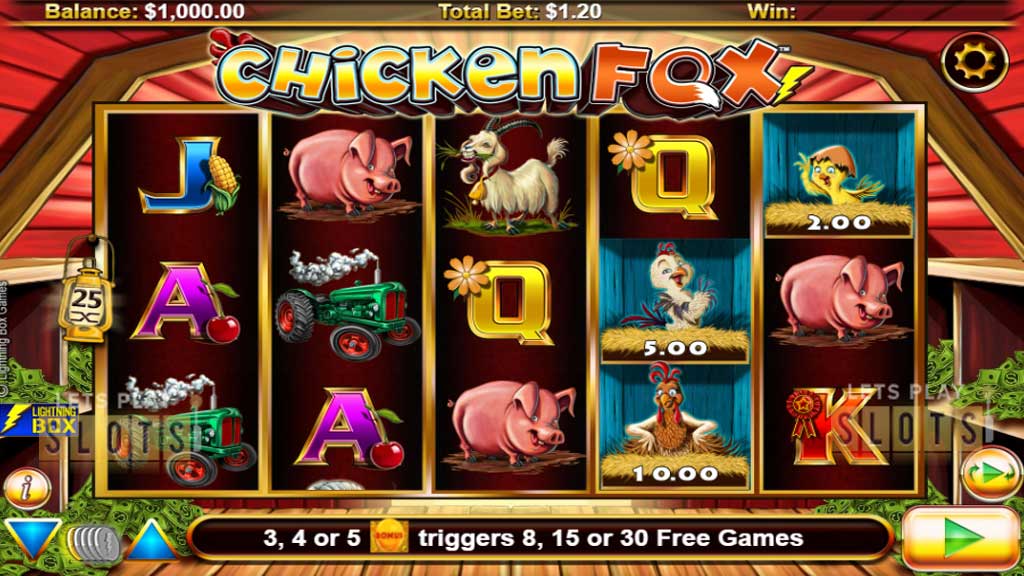 When a fox is about to raid a chicken coop, you know things are about to get crazy. This Chicken Fox slot game from Lightning Box will bring all the crazy to you, featuring Jackpot Wins, Wilds, Freespins and much more for you to be entertained by. 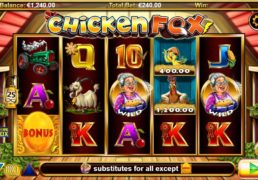 Imagine the fun that you could have as a fox being able to sneak into a chicken coop and find your own kind of pot o’ gold! The Chicken Fox slot from Lightning Box will allow you to experience something just like that. I enjoy the game’s top-quality graphics and smooth gameplay, making it one that fits into the developer’s catalogue nicely – especially when you consider the special bonus features that the game contains. 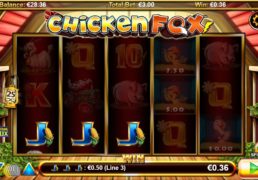 The slot includes a layout of five reels and three rows altogether, making it a standard and often-seen interface to play on. This is joined by a total of 25 pay lines for you to bet on, which have been set in position. You do have the option of changing your wager, which is done by using the relevant up and down arrows at the bottom-left side of the screen. These allow you to select bets between the minimum of €0.30 and the maximum of €240 per spin.

The first of Chicken Fox’s symbols exist in the form of the playing card additions, meaning you’ll see 10 through to A to begin with. After this, there’s the symbol of the goat, which can pay out up to 250 times your stake, while the pig icon can reward you with up to 300 times your bet. There’s also a symbol of a tractor, which can multiply your bet by up to 400 times over. 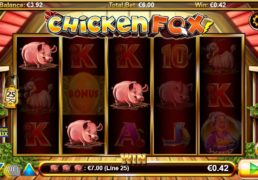 The slot has two different wild symbols – the first coming in the shape of the wild lady, which can substitute for all other icons, except for the bonus symbol. The second is the symbol of the fox, which can come as a standard wild or a double wild. This appears during the freespins round only and will stand in for all chicken symbols.

The game’s bonus symbol is that of the golden egg – something that I’ve never seen a chicken lay before! This operates as a scatter, and if three, four or five of them come into view anywhere, you’ll win eight, 15 or 30 freespins, respectively.

The quirkiness of this game is one thing that immediately attracted me to playing it. Once I started spinning its reels, I thoroughly enjoyed it, being able to trigger the freespins round a couple of times and watch as the fox caught his meals. The soundtrack of Chicken Fox is a little bit irksome after a while of listening to it, but the game holds plenty of appeal otherwise.

When a fox is about to raid a chicken coop, you know things are about to get crazy. This Chicken Fox slot game from Lightning Box will bring all the crazy to you, featuring Jackpot Wins, Wilds, Freespins and much more for you to be entertained by.

Hurray! There is a competition going between users of our site!
You have to do nothing, but browse out site, and win a daily prize. Click here to read more.
You current ranking:
Time Left: 5h 7m 4s
Gambling is for 18+ though some countries may have other restrictions...Remember you should always Gamble Responsibly
We use cookies to ensure that we give you the best experience on our website. If you continue to use this site you agree to allow us to use cookies, in accordance with our Terms & Conditions.Agree & Close