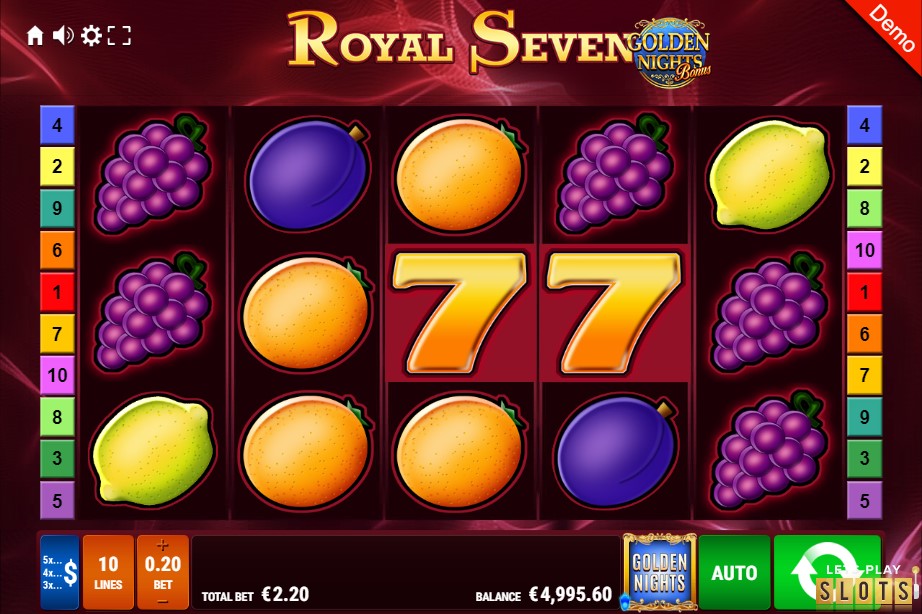 If you’re a fan of traditional slot games, then Gamomat has one for you to access with Royal Seven: Golden Nights. Featuring classic fruit symbols, a Gamble round, and, of course, the Golden Nights bonus feature, you’ll find plenty to enjoy in this one.

I’ll be the first to admit that traditional slots games don’t often grasp my attention, as they usually tend to be quite similar to one another. The thing that caught me in Royal Seven: Golden Nights is the actual Golden Nights part of it. This operates as the game’s bonus and jackpot feature – it’s only one. And having never played a traditional slot game setup with such an inclusion, I was intrigued to see what Royal Seven had in store for me. 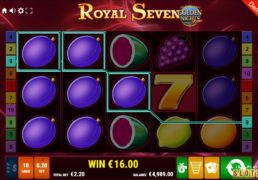 If you do decide to play this game, just as I did, then you’ll see that there’s a standard five-reel, three-row layout on display. This also contains a total of 10 paylines for you to bet on, which cannot be adjusted. On the other hand, you can alter the wager that you place on these lines. The game features coin values of between €0.10 and €500 for you to select from. This means that a maximum overall wager of €5,000 per spin is possible.

When it comes to the visual side of Royal Seven: Golden Nights, the graphics are fairly basic when you compare it to other video slots. The symbols upon the reels are all traditional, providing fruit icons for you to spin through. These include the cherries, the lemon, the orange and the plum, all of which provide maximum rewards of €100,000. There’s a bunch of grapes on the reels too, while a watermelon comes next. The number 7 is, of course, the highest-paying symbol. This one can pay out up to €2,500,000. 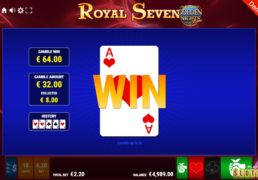 The only real extra feature that this slot contains is the Golden Nights Bonus addition. To ensure that this is active, you need to press on the button at the bottom of the reels for it. An additional bet will be added on top of your current stake if you do so.

If this feature round does trigger, then three chests will appear on the screen, which open successively from left to right. Should all three chests be filled with gold, the Golden Nights draw will begin. Collected points on the reels will then fill a meter to determine your Jackpot win. These run between Iron, up to Copper, Bronze, Silver, Gold, Jewel and Super Jewel.

Every time you form a win during the main game, you can choose to play a gamble round if you like, though. There’s a card guessing game or a ladder climbing feature that operates as such, giving you the opportunity to try and increase your winnings.

When I compare Royal Seven: Golden Nights to other traditional video slots, I wouldn’t be wrong in saying that it stands out as being slightly alternative. This is entirely due to the randomly triggered jackpot feature round, because everything is within the slot is quite basic on the whole.

If you’re a fan of traditional slot games, then Gamomat has one for you to access with Royal Seven: Golden Nights. Featuring classic fruit symbols, a Gamble round, and, of course, the Golden Nights bonus feature, you’ll find plenty to enjoy in this one.

Hurray! There is a competition going between users of our site!
You have to do nothing, but browse out site, and win a daily prize. Click here to read more.
You current ranking:
Time Left: 2h 32m 23s