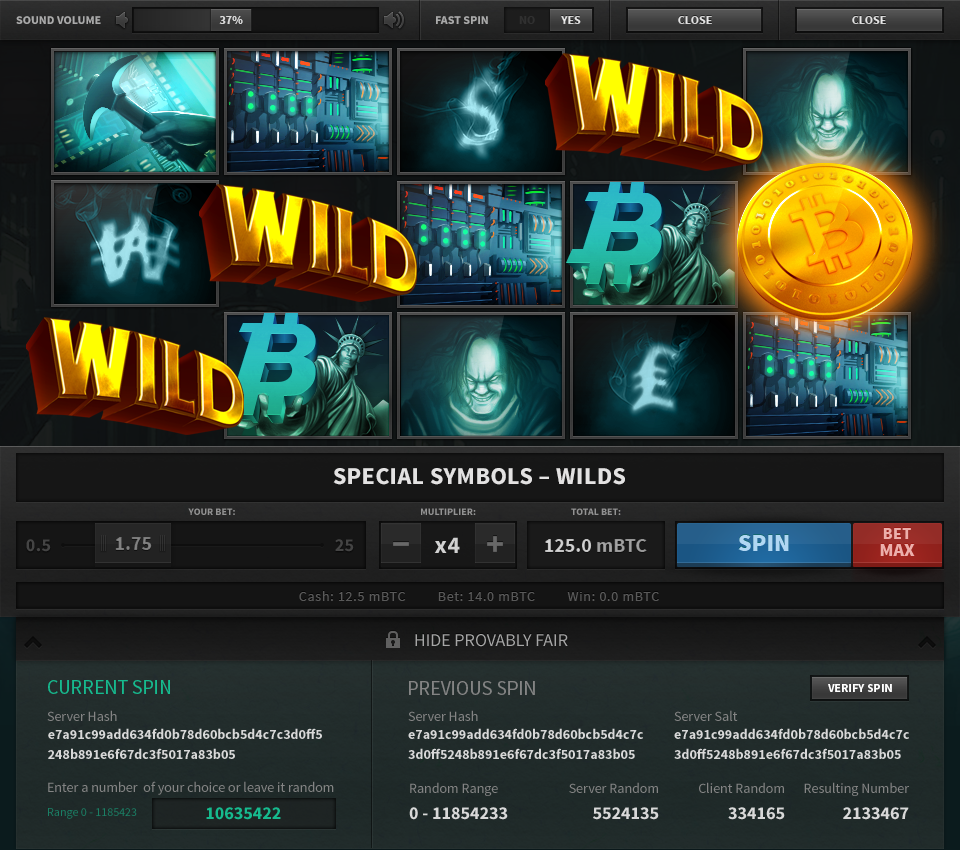 Satoshislot is a Bitcoin themed slot by Rakki, and it features an excellent theoretical payout, and a free spins game in which you can get up to 40 stacked Wilds. This game that can only be played in Bitcoin was released in late 2018. 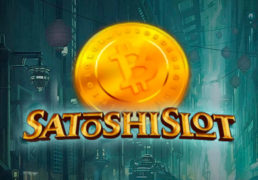 Two main things about Satoshislot are the very good theoretical payout of 97.40% and the fact that you actually place your bet in Bitcoins, or more precisely, mBTC, which is 1/1000 BTC. This is one of the first slots to do this, and that means Satoshislot can only be played in true Bitcoin casinos in which your deposit isn’t converted to a fiat currency.

I have played Satoshislot for a while and I enjoyed the theme more than anything. It’s a dark palette that’s common in cryptocurrency and hacking themes, but the two main symbols really stand out as they’re made of gold – Wilds and Bitcoin Scatter.

Other than the fact that this game is played in Bitcoins, it’s essentially a 5×3 classic slot with 25 paylines. There are no further surprises, at least not negative ones, as you got Wilds, Scatters and a free spins game – things you see in almost every slot machine. 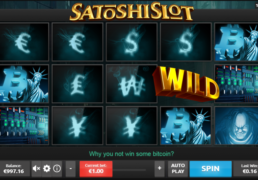 The five low-win symbols are cleverly symbolized by fiat currencies, and all crypto enthusiasts will chuckle at this. Prizes are as low, and you’ll basically only be able to get your stake back and win something if you land five-of-a-kind. With the four high-win symbols, all beautifully drawn and animated, it gets much better, but still you won’t get anything for three-of-a-kind. The best possible prize in this game for three-of-a-kind is only 2x your stake. The prizes for five-of-a-kind, however, are good, and in case of these four symbols they’re 16x, 18x, 26x and 40x your bet respectively.

This game pays often enough but most of those wins are smaller than your bet, which may be annoying to some players. On the other end of the spectrum are those five-of-a-kind wins involving high-win symbols that pay well, but which are rare. Even if the theoretical payout is very good, it’s difficult to make this slot pay, so longer playing sessions and a lot of patience are required. It’s safe to say this is a high variance slot. 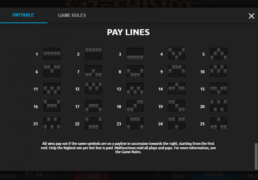 The free spins game has a lot of potential to pay well even if the maximum possible number of free spins is only 20 since they can’t be re-triggered, but these stacked Wilds and the Bitcoin Wilds can matter a lot – especially with this generous paytable. Expect to win big in the free spins game in Satoshislot. This is when this game gets loose, aided by those Wilds, and five-of-a-kind wins will be pouring in.

Satoshislot has a limited audience as it’s a game that can only be played in Bitcoins, but that also means that it’s a true cryptocurrency slot, and not like the others that are themed around cryptocurrencies but can be played in fiat currencies – which crypto enthusiasts won’t take too kindly. Also, the game is by a small developer so it isn’t expected to take the world by storm. But it’s a quality slot with a great theoretical payout, a good paytable, so it’s among the better slots that were released in 2018. Satoshislot is a simple game with a classic-like playing experience, but that’s exactly why it’s so good.

Satoshislot is a Bitcoin themed slot by Rakki, and it features an excellent theoretical payout, and a free spins game in which you can get up to 40 stacked Wilds. This game that can only be played in Bitcoin was released in late 2018.

Hurray! There is a competition going between users of our site!
You have to do nothing, but browse out site, and win a daily prize. Click here to read more.
You current ranking:
Time Left: 1h 9m 12s