Shiba Inu is a slot game by Ganapati that was released in June 2019, and it has some exciting bonus features, the most important one being the train that can pass in front of your reels and will leave behind up to 15 Wilds on your board! There are also up to 30 free spins to win, and during this feature the trains are much more common.

Shiba Inu is a slot game by a Japanese developer Ganapati. A soft pastel theme was used for this slot, and it seems it’s intentionally a blurry one to make things even softer. It looks good though, and there’s no way this game will hurt anyone’s eyes. You can play this one for a long time without getting weary. The bets can range from €0.15 to €18 in ten preset levels. Spins are just fast enough, but you can make the game a bit faster by using Autoplay instead. 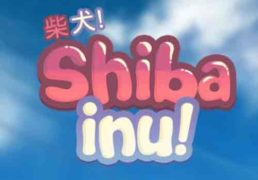 The paytable consists of four dogs and five card symbols, and there’s a big discrepancy between the two groups when it comes to five-of-a-kind wins but they’re pretty similar when you’re getting a smaller winning payline. The card symbols pay from 3.33x to 5x your bet for a five-of-a-kind, while the high-win symbols peak at 33.3x, with other three high-win symbols paying 16.67x, 10x and 6.67x your bet.

Four-of-a-kind will pay from 1.33x to 3.33x your bet so it’s pretty much unimportant if you landed a high- or low-win symbol, and the same is even more true for three-of-a-kind wins, which pay from 0.33x to 1.33x your bet. In short, in this game you should only care about five-of-a-kind or multi-payline wins, as a single payline that has four or less symbols will never pay too much regardless of the symbol that landed. 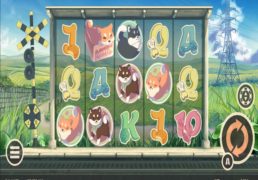 Bonus Symbol acts both as a Wild and a Scatter as it will substitute for all other normal symbols, and three, four or five Bonus Symbols will trigger the free spins game. You’ll get 10, 20 or 30 free spins for three, four or five Bonus Symbols respectively. Whenever a train passes in front of your reels it will leave some Wilds on the board, and this happens in the base game as well, but during the free spins game the trains will be more common. Each train can add up to 15 Wilds on your board, so it’s even possible to land a full board of Wilds!

While the paytable can sometimes pay well even without any bonus features, for all practical purposes you will need the help of some Wilds to land that multi-payline win, especially as this slot game only has 15 paylines so it’s common to see five of the same symbol on your board but not aligned properly on a payline. Most wins in this game will come after the train leaves some Wilds.

Shiba Inu slot has a theoretical return to player (RTP) of 96.06%, which puts it right in the middle of the ballpark, together with most modern slots. There’s no fear that this slot game is out there to steal your money because it’s not, this is a decent slot game with medium variance, and a clear path to big wins – the train with the Wilds.

Shiba Inu is a carefully balanced game in which everything works as it should, and you’ll have a good time playing it. The slot game is simple, as slots should be, yet the combination of a free spins game with up to 30 free spins and a Wild train that passes much more frequently during that feature can really bring you a lot of cash. Find a good casino with this game and play for real money, as this game can really pay.

Shiba Inu is a slot game by Ganapati that was released in June 2019, and it has some exciting bonus features, the most important one being the train that can pass in front of your reels and will leave behind up to 15 Wilds on your board! There are also up to 30 free spins to win, and during this feature the trains are much more common.

Hurray! There is a competition going between users of our site!
You have to do nothing, but browse out site, and win a daily prize. Click here to read more.
You current ranking:
Time Left: 2h 20m 5s