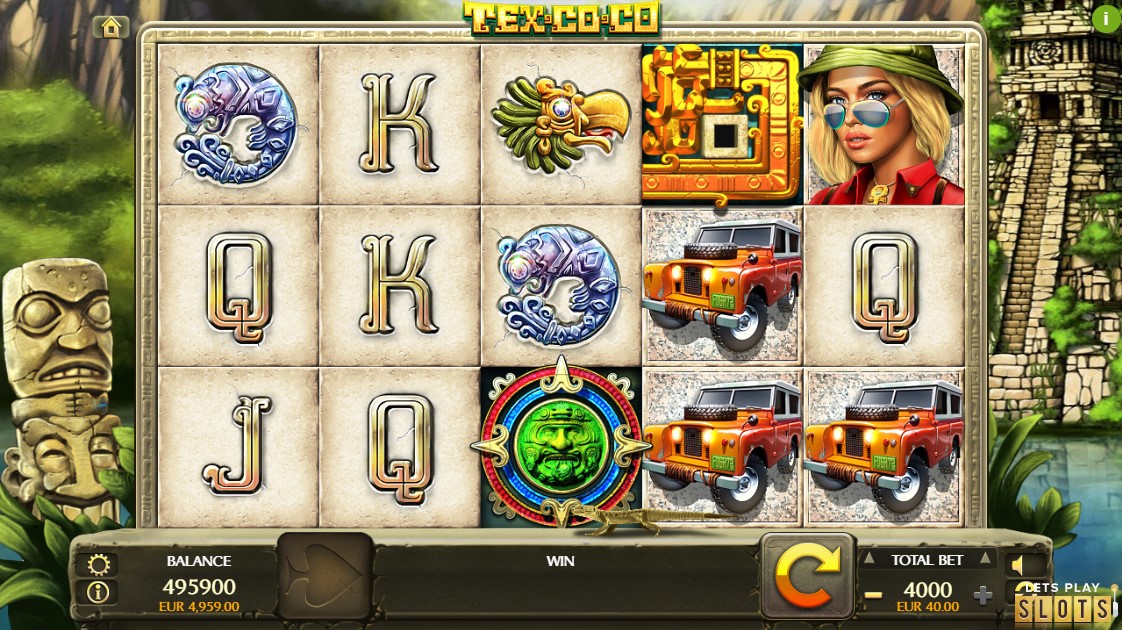 There’s a female adventurer waiting to take you to the lands of TexCoCo, so make sure you’re ready for this Fuga game. While you’re spinning its reels, you may see the Artefact Feature, Bonus Game, Respins and more come into play.

Like some others, I was already well aware that Texcoco existed as a member of the Aztec Triple Alliance in the historical region of Mesoamerica. Of course, that’s what this game takes its basic theme from, although there’s plenty more to experience when you play it. I wasn’t altogether familiar with so many Fuga slots before playing TexCoCo, but it certainly opened my eyes to the developer and what it can provide. This slot certainly had me hooked from the very first spin. 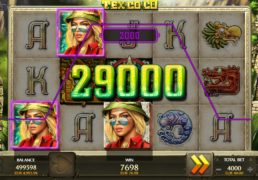 Playing this game will provide you with a five-reel, three-row layout, which is quite standard for a video slot. Additionally, across this layout, the provider has chosen to add a total of 40 paylines to bet on. These aren’t able to be customised, but instead, you do have the option of changing your wager. TexCoCo provides you with the options of bets between the minimum of €0.80 and upwards to €40 per spin.

The visual side of this game is something that stood out to me from the moment that I loaded it up. Fuga has utilised intriguing graphics throughout, providing Aztec imagery in the background and impressive symbols upon the reels. You’ll see that standard J, Q, K and A additions are present to begin with. They’re followed on by the symbol of the bird, the fish and then the dragon, with the latter of these able to pay out up to 500 times your stake. There’s also a symbol of a tortoise and an adventurer’s jeep. The explorer herself acts as the highest paying standard symbol, and she can reward you with up to 2,500 times your wager. 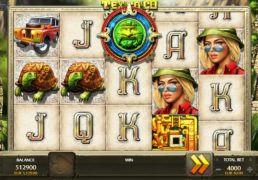 One of my favourite special additions to this slot is its Artefact Feature. If the artefact symbol does show up on the third reel, it can swap positions with other adjacent symbols. This will only take place if it ensures that the total win amount is improved upon.

TexCoCo does have its own scatter symbol as well, which is present in the shape of a carved dragon. If three of these show up on reels two, three and four, then the bonus round starts. You’ll need to find two identical treasures in this round to receive a prize. If you find a Golden Treasure though, you’ll get a super prize!

Another favourite part of this game for me is the Respins round. If three or more scattered totem symbols show up anywhere, then you’ll start the Respins feature. Before the round begins, the scatter icons are transformed into green, purple or orange totems. These each have different effects on the respins that proceed afterwards.

The green totem turns into a random paytable symbol, except for the explorer. Each of the purple totems has its own win multiplier which will increase after everything respin up to times seven. It will then substitute for all other standard symbols, except for the explorer. If it turns into an orange totem, this will appear in stacks of two, four and six. This also works as a wild symbol, but the totems will then move around the reels, demonstrating that extra stacked totems are coming into play. 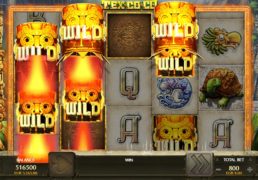 If I’m honest, I wasn’t really sure what to expect from TexCoCo when I first heard of it. I’m definitely glad that I took the time to play it though, because it has since become one of my favourite new slots. I’d recommend it to anyone, especially thanks to the inclusion of the respins and Artefact specialities.

There’s a female adventurer waiting to take you to the lands of TexCoCo, so make sure you’re ready for this Fuga game. While you’re spinning its reels, you may see the Artefact Feature, Bonus Game, Respins and more come into play.

Hurray! There is a competition going between users of our site!
You have to do nothing, but browse out site, and win a daily prize. Click here to read more.
You current ranking:
Time Left: 11h 39m 39s
Gambling is for 18+ though some countries may have other restrictions...Remember you should always Gamble Responsibly
We use cookies to ensure that we give you the best experience on our website. If you continue to use this site you agree to allow us to use cookies, in accordance with our Terms & Conditions.Agree & Close