The Great Albini is ready to perform on stage for you, so get ready to watch his magic and illusions. Watch out for the Wild symbol, the Mystery Box Respin, the Free Spins round, Bonus Box Feature and even the Lily Feature!

Best Casinos to Play The Great Albini for Real Money : 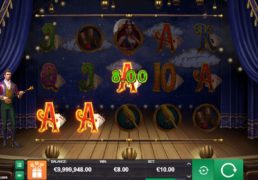 I have to admit that I love playing slot games that base themselves on the theme of magic. And what better kind of magic is there than that which takes place in a magic and illusion show? That’s exactly what you’ll get when you access this Foxium slot known as The Great Albini. I was instantly impressed by the graphics that this slot utilises and even more so by the inclusive soundtrack as well. Everything merges together exceptionally well, and the number of special features make it even more appealing. 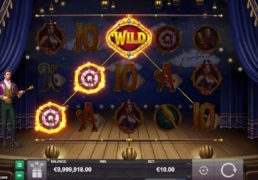 The setup of The Great Albini is very familiar, as it uses a five-reel, three-row layout. Joining this, you’ll be able to place bets on a total of 25 bet lines, although the number of lines will increase to 50 during freespins. You can adjust the bet that you place between €0.25 and €30 per spin. This is done by using the relevant up and down arrows at the bottom of the reels.

When it comes to the symbols that appear on the five reels, these begin with the standard playing card icons of 10, J, Q, K and A. You’re able to win up to 80 times your in-play stake with the A icon. Then come five thematic symbols, beginning with the Lucky Cups, which can reward you with up to 100 times your bet. There’s also the icon of the Knives, the Canary, the assistant known as Lily and finally, Albini himself. He can pay out up to 1,000 times your wager. 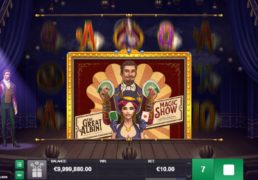 A magic show would be nothing without some specialities. Fortunately, there’s a wild symbol to begin with in The Great Albini. This can appear on reels two to five and it can substitute for any other symbol, with the exception of the bonus icons.

The Lily Feature activates whenever the Lily Wild lands on reels two, three or four, completely covering the reel. All wins are multiplied by two with this and it can also reward you with re-spins.

Finally, if you want to activate a freespins round instantly, you can buy eight, 10 or 12 of these. Just click on the gift box at the bottom of the reels to do this.

I may sound like I’m gushing a bit about The Great Albini, but it’s quickly become one of my favourite slots ever. Foxium has certainly kicked it out of the park with this game, both in terms of graphics and gameplay. The special features are thoroughly appealing, and the overall theme works exceptionally well. Highly recommended by me.

The Great Albini is ready to perform on stage for you, so get ready to watch his magic and illusions. Watch out for the Wild symbol, the Mystery Box Respin, the Free Spins round, Bonus Box Feature and even the Lily Feature!

Hurray! There is a competition going between users of our site!
You have to do nothing, but browse out site, and win a daily prize. Click here to read more.
You current ranking:
Time Left: 2h 36m 28s