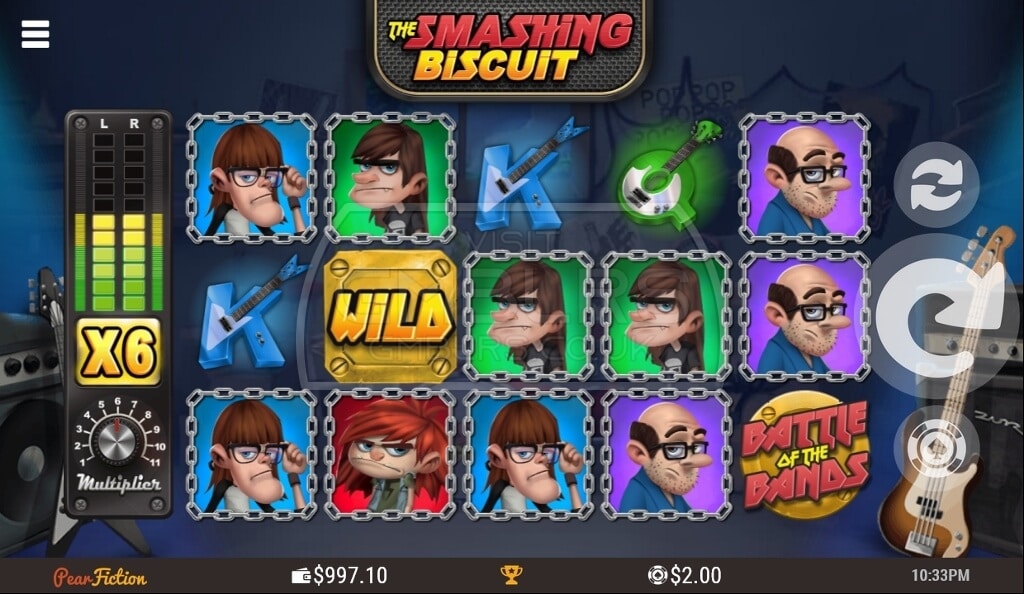 The Smashing Biscuit is a slot game by PearFiction that is themed around a three-man band that is trying to make it in the music business. This is a fun game with a free spins game that’s particularly fun, and you can get win multipliers up to x11!

Best Casinos to Play The Smashing Biscuit for Real Money :

The game is very modern, with excellent graphics that are better than most non-gambling games. The main characters are the three members of The Smashing Biscuit band, and they want to win the battle of the bands, and you’ll help them. The slot game is played on a 5×3 board with 20 fixed paylines, and you pay from €0.20 to €100 per spin. 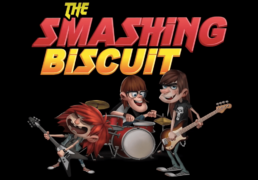 When you look at the paytable, it will display prizes that would be paid with your current bet level and the current win multiplier that you see on the Multiplier Meter. Without a multiplier, the four Guitars will pay from 2x to 3x your total bet for five-of-a-kind, and the four main characters have a wider range. Dad pays 4x and Soggy Biscuit pays 5x, but two other Biscuits, Crunchy and Tiny, pay much better, 12.50x and 25x respectively.

Since the multiplier can go up to x11 – which is a nod to the idea presented in the movie Spinal Tap that you can make the amplifier louder by increasing the volume to 11, then the best possible prize in the paytable is 275x your bet for five-of-a-kind of Tiny Biscuit. With a full-board win, that would be whopping 5,500x your bet. When you land a win, the Multiplier increases by x1, and when you lose it decreases by x1.

Prizes for any win other than five-of-a-kind are awful though. In case of Tiny Biscuit you’ll get 10 times less when you land four-of-a-kind, and the rest of the table follows similar guidelines. In this game, you either get a five-of-a-kind or a multi-payline win, or you don’t win much and not even the win multiplier will help you with those smaller wins. 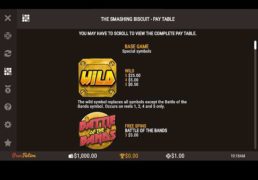 Random Dad Bonus can get activated anytime, and you’ll get either a multiplier increase, a win, or you’ll trigger the Battle of the Bands feature. More commonly, you’ll trigger the main bonus feature by landing three Scatters on reels 1, 3 and 4 as Dad doesn’t trigger it that often.

There are also Achievements that the game keeps track of and you can find them in the menu. There’s nothing to be gained, except for the fact that you might want to check if you got all Achievements to see if there’s something the game offers and that you didn’t get yet.

Theoretical return to player (RTP) is 96.01%, which is decent and in line with modern standards. This is a solid game that pays rather well and the variance is medium, and there are no ugly surprises. The game just plays well and it’s an overall enjoyable experience, with variance that seems to be medium.

The Smashing Biscuit is just a fun slot game that doesn’t do anything wrong but doesn’t offer anything that special either – except for that x11 win multiplier that can really bring you huge wins. You should play this game for the theme and the experience alone, but you can win some money too as the game pays well. Find a casino with PearFiction slots and play this game for real money, it’s worth it. The game can pay up to 5,500x your total bet on a single spin.

The Smashing Biscuit is a slot game by PearFiction that is themed around a three-man band that is trying to make it in the music business. This is a fun game with a free spins game that’s particularly fun, and you can get win multipliers up to x11!

Hurray! There is a competition going between users of our site!
You have to do nothing, but browse out site, and win a daily prize. Click here to read more.
You current ranking:
Time Left: 10h 19m 22s