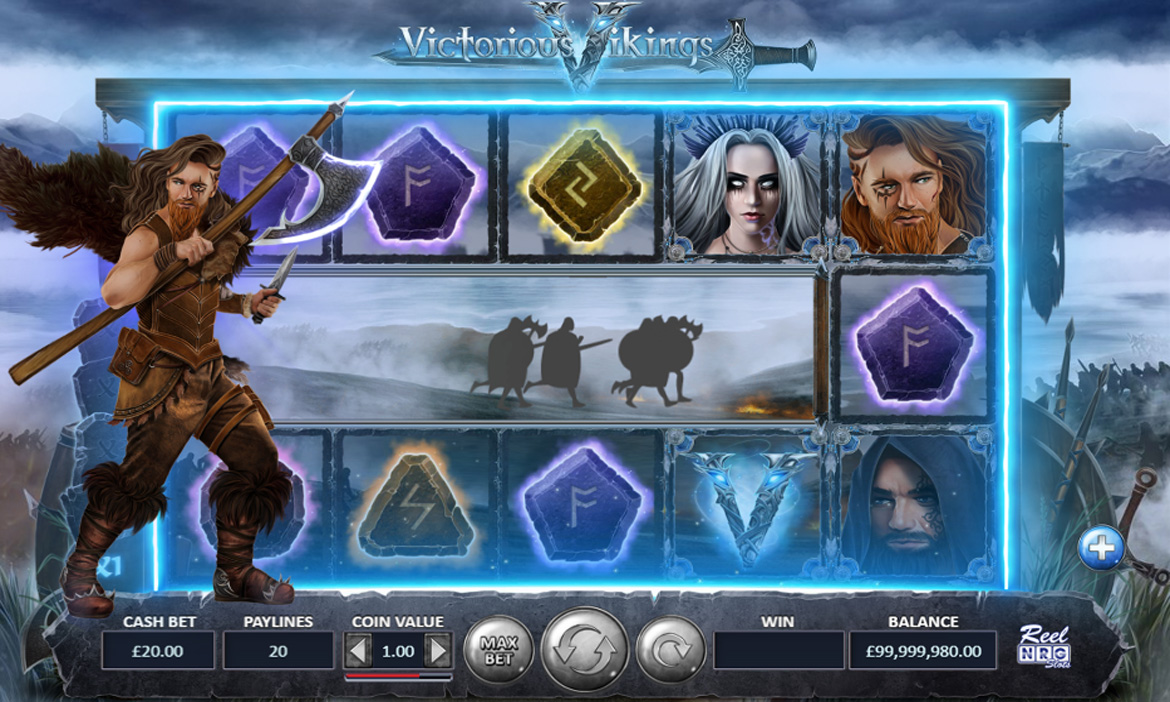 Victorious Vikings is a 2018 release by ReelNRG and is a quality slot game that has several interesting features such as cascades, clones, free spins and colossal symbols!

ReelNRG released this slot game in late 2018 and added to the Viking genre of slots that emerged with the popularity of the History Channel TV series. This game has a good theme that will be liked by all Vikings fans, there are enough bonus features to keep a player interested, and the paytable is decent. After a few hours of playing this game I believe I have identified the pros and cons of this game, so let’s have a look if Victorious Vikings slot is any good or not. 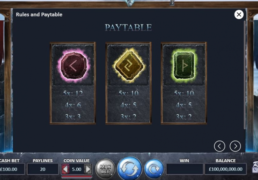 The game is played on a standard 5×3 board with 20 fixed paylines, and your bet per spin can range from €0.20 all the way up to €2000, so be careful with that Max Bet button. There are seven rune stones which represent the low-value symbols, and these really pay insignificant prizes that range from 10 to 15 coins for five-of-a-kind. The four Viking characters are the high-value symbols, and these range in prizes from 40 to 90 coins, and they even pay relatively well for four-of-a-kind. It’s these four symbols you’ll care about, and there’s also a paying Wild and a Scatter that triggers the free spins game.

Playing Victorious Vikings is never boring, as you get those cascades and the increasing multipliers that come with each new cascade, the Viking Clone Feature can get triggered anytime, and if you land three Scatters then you’ll enter the free spins game in which you’ll have Colossal symbols. 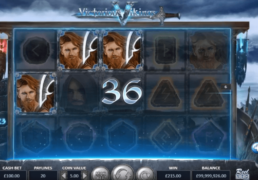 Whenever you land a winning combination, the winning symbols wil disappear and will be replaced by new ones that fall from above. If there are any new winning combinations that are formed, they will again explode and will let new ones fall into place. Every time this happens, the winning multiplier will increase, and it can reach x5 on the fifth cascade. This offers a relatively decent route to a big win, as you can get five or more wins on the same spin, plus some win multipliers, and this can amount to something good.

Viking Clone Feature gets triggered randomly. It replaces symbols with high paying symbols and therefore increases the chance of landing a bigger win than what you’d normally get. 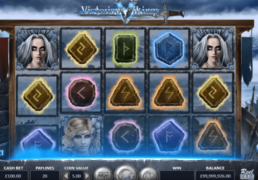 The theoretical return to player (RTP) of Victorious Vikings is a bit of a disappointment as it stands at 95.05%, which means that this slot is in the same range as those outdated classic slots that don’t pay well at all compared to modern titles. It does have medium to high variance, however, so we could easily mistake Victorious Vikings for a classic slot if the graphics weren’t this good. It’s a game that will be enjoyed the most by classic slot players, though they might resent the abundance of fun features.

Victorious Vikings is a decent addition to the genre and is a slot game you should definitely try out despite its low theoretical RTP. The slot game can pay well if you catch it at the right time, and with this sheer number of bonus features the big win is always right around the corner. The free spins game is a particular highlight because of the Colossal symbols, so if you want to have some fun playing a Viking slot, this is a really good choice.

Victorious Vikings is a 2018 release by ReelNRG and is a quality slot game that has several interesting features such as cascades, clones, free spins and colossal symbols!

Hurray! There is a competition going between users of our site!
You have to do nothing, but browse out site, and win a daily prize. Click here to read more.
You current ranking:
Time Left: 10m 14s