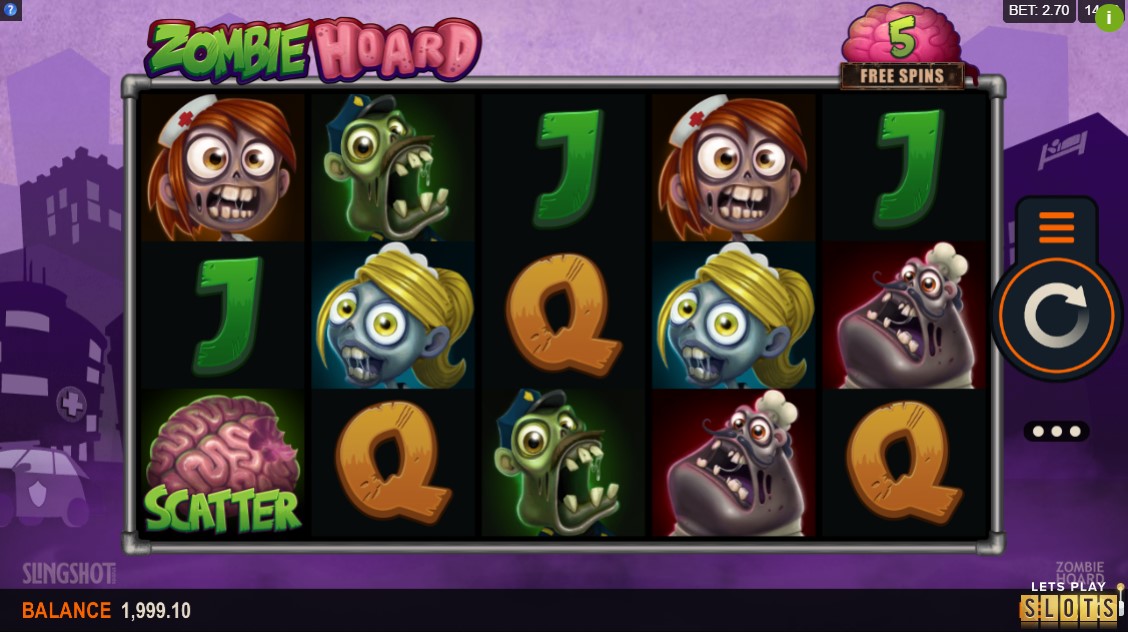 While trying to avoid the Zombie Hoard in this slot game, you may want to watch out for the Super Stacked Wilds. These are joined by a Free Spins round, a Scatter symbol and more. Prepare to have an enjoyable time with this Slingshot Studios slot offering.

The zombie theme for an online slot game is always a classic one to go back to – although it’s also important for a developer to put a new spin on it, I think. Slingshot Studios and the Zombie Hoard slot does manage to do this in a lot of ways, presenting a thoroughly entertaining game. Actually, as soon as I saw it, I knew that I’d enjoy spinning the reels. The inbuilt features that the game has just added to that appeal. 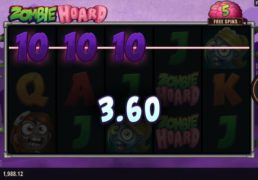 As far as the layout of Zombie Hoard is concerned, this consists of five reels in total, which are joined by three rows. Across this layout, there are nine paylines for you to bet on, which you don’t have the possibility of customising. You do, on the other hand, have the chance to change the value of the bet that you place. The game allows you to select a coin value between €0.01 and €0.25, while the bet level is changeable between one and 20. This means that a maximum overall wager of €45 per spin is possible.

The graphics that Slingshot Studios has used in this game are of the highest-quality, bringing the characters on its reels to life. The first five of these are visible in the playing card symbols from 10 to A. Then comes the blonde zombie girl, which can reward you with up to €400. The police officer zombie comes next, followed by the nurse zombie. Finally, the chef zombie is the highest-paying standard symbol. He can reward you with up to €2,500.

The slot also contains its own wild symbol, which is the game’s logo. This one will assist you in creating wins by substituting for all the other symbols mentioned above. It can also reward you with up to €6,000 as a pay-out. 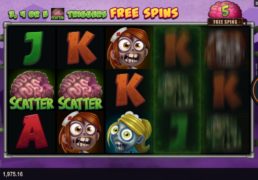 The first of this game’s special features is probably my favourite one – the scatter. This is represented by the image of the brain, and as a scatter, it can show up anywhere and still provide a pay-out of up to €4,500. This one is also able to trigger the slot’s free spins round, just by three or more showing up anywhere.

You’ll be able to see the number of free spins that are available for triggering at the top-right of the reels. Every time a free spins symbol shows up attached to a lower-paying symbol, it will add an extra free spin to the stash. Activating the free spins round will provide you with these free spins, with up to 30 being available and a minimum of 5. All wins during this round are paid out with a 2x multiplier applied to them. You can also trigger this feature by collecting 30 free spin tokens.

One final thing to watch out for in Zombie Hoard, is the Super Stacked Wilds. These can show up in stacks on reels three and four during the base game. However, they appear on all reels during the free spins feature round. 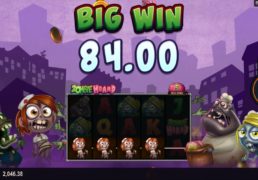 I have to say that a slot game with the zombie theme behind it will always appeal to me, but when it’s done to such perfection as this one is, I’m likely to keep returning to it again and again. Slingshot Studios has definitely crafted a thoroughly entertaining offering with this one, and I for one am a big fan.

While trying to avoid the Zombie Hoard in this slot game, you may want to watch out for the Super Stacked Wilds. These are joined by a Free Spins round, a Scatter symbol and more. Prepare to have an enjoyable time with this Slingshot Studios slot offering.

Hurray! There is a competition going between users of our site!
You have to do nothing, but browse out site, and win a daily prize. Click here to read more.
You current ranking:
Time Left: 20h 39m 31s
Gambling is for 18+ though some countries may have other restrictions...Remember you should always Gamble Responsibly
We use cookies to ensure that we give you the best experience on our website. If you continue to use this site you agree to allow us to use cookies, in accordance with our Terms & Conditions.Agree & Close