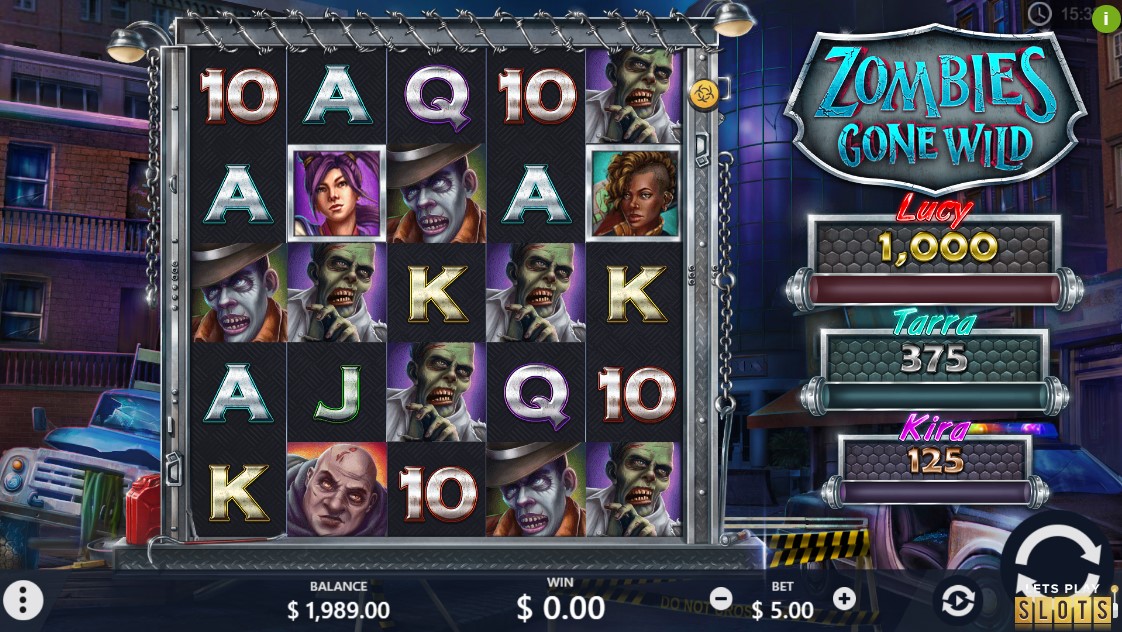 It’s time to unite with Lucy, Tarra and Kira in order to slaughter some Zombies Gone Wild in this Pariplay slot offering. Make sure you come well-equipped and ready to experience the Wilds, 3 Jackpots, Free Spins and more.

Zombies Gone Wild was one of those games that when I first heard its title, I had the idea that it would be like all the other zombie-themed slots that are available. Well, upon playing it, I was pleased to actually be proved wrong on that count. Pariplay has actually crafted this slot and made it unique in its own special way. It tells the story of three zombie hunters – Kira, Tarra and Lucy – who are out to smash as many of the living dead as possible. I was certainly up for joining them in the fight! 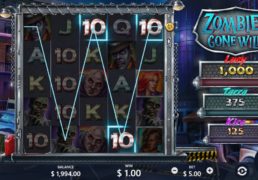 The first thing that I like about this game, is that it utilises a slightly different layout to what is considered the norm. While it has five reels, it also comes with five rows to spin. Across this layout, Pariplay has included a total of 50 paylines to bet on, which you don’t have the option of changing. Instead, you can alter your wager in the game between €0.50 and €25 per spin. This is done with the plus and minus buttons at the bottom of the reels.

The background of this game takes you to a quarantine zone, with police cars cordoning the area off. Upon the reels, the first of this slot’s symbols are present in the playing card additions from 10 to A, with the highest able to multiply your stake by up to 75x over. Next in line are three male zombie character symbols. All three of these can provide a maximum reward of 100x your overall wager as a pay-out. The three female hunters can also be seen as symbols upon the reels, providing maximum rewards of 500x your bet. 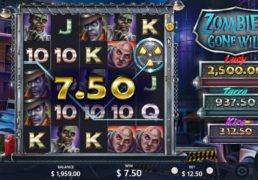 There are a few special features that Pariplay has added to Zombies Gone Wild, starting with the free spins round. The radioactive symbol is the one that will trigger this round, with three or more needing to come into play on the reels to do so. Up to 20 free spins can be won, and during this round, the zombie hunter symbols will turn into mega wilds with multipliers of up to 4x included.

The game also features something known as Random Wilds, which is perhaps my favourite part of it. At random moments during base gameplay, radiation will infect the hunter symbols on the reels and in the process, turn them into wild zombies. As such, they will then substitute for all other standard symbols, helping you with forming winning combinations.

Additionally, at the left-hand side of the reels, you’ll see three jackpot totals – one for each of the three female hunters. Winning a line with a wild zombie hunter symbol will then contribute an amount to their respective jackpot. When one of those corresponding bars is full up, you will receive a jackpot pay-out for it. The purple jackpot is 25x your stake, the green is 75x your bet and the red one is 200x your in-play stake! 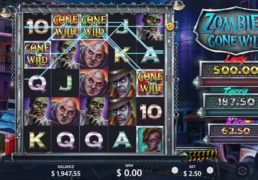 I’m going to come right out and say that I pretty much love Zombies Gone Wild. It’s one of those slots that you start playing and find yourself compelled to spin some more. The graphics are stunning, Pariplay’s inbuilt features are entertaining on a whole new level and the overall gameplay just stands out, too. On the whole, I highly recommend it to anyone looking for a new game to access.

It’s time to unite with Lucy, Tarra and Kira in order to slaughter some Zombies Gone Wild in this Pariplay slot offering. Make sure you come well-equipped and ready to experience the Wilds, 3 Jackpots, Free Spins and more.

Hurray! There is a competition going between users of our site!
You have to do nothing, but browse out site, and win a daily prize. Click here to read more.
You current ranking:
Time Left: 12h 4m 12s
Gambling is for 18+ though some countries may have other restrictions...Remember you should always Gamble Responsibly
We use cookies to ensure that we give you the best experience on our website. If you continue to use this site you agree to allow us to use cookies, in accordance with our Terms & Conditions.Agree & Close