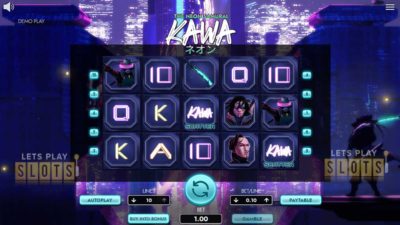 Arcadem has made a rather interesting slot game based on an original theme. Mashing together futuristic cyberpunk with samurai adventure, “The Neon Samurai: Kawa” takes players to a futuristic society in Japan. Players will be joining a samurai named Kawa on his quest to destroy his enemies as he enters the futuristic city called the Citadel.

The game uses the cyberpunk theme to its full effect. Players are treated to the sight of a futuristic city with all the trimmings. Tall buildings and bright lights are visible in the background while the samurai Kawa stands off to the side. The game has a futuristic soundtrack that is very distinct and stays with you even after you wind up playing.

This game has a grid of five reels and three rows. There are 10 paylines for players to win on. The goal is to match some of the card royals and the special symbols. This includes a glowing katana, a soldier, a mysterious character called Paradox and the samurai Kawa. There are also two special symbols. These are the Wild symbol, which has the word Wild on it, and the Scatter symbol, which has the game’s logo.

The betting range for this game starts at €0.01 a spin. Players can go all the way up to €100 per spin. The rewards can get impressive since players can win a maximum of 17,000x their stake. The most valuable symbol of the bunch is the Wild, which will give players 3,000 times their stake for five symbols on a payline.

Players will want to trigger one of the many special features that this game has. The most appealing feature is the Free Spins feature. Players will have to match three of the Scatter symbols to trigger the free spins. When this happens players will get 10 free spins.

The free spins are only the beginning. During these free spins, the Wild symbol gets an extra ability. They become sticky wilds. This means they stay in the slot they land. This lasts until all the free spins are gone. Players who are lucky enough to score another set of Scatters will be able to get 10 free spins. Additionally, players who cannot wait can also buy Free Spins.

Another thing to look out for is the Gamble feature. This allows you to go double-or-nothing on any win. Finally, there is the Kawa spin feature. If this activates, Kawa appears and converts low rewarding symbols to a more valuable one.

Overall, this game is a nice distraction and deserves a few spins when it arrives at your favorite online casino.

Hurray! There is a competition going between users of our site!
You have to do nothing, but browse out site, and win a daily prize. Click here to read more.
You current ranking:
Time Left: 18h 27m 19s
Gambling is for 18+ though some countries may have other restrictions...Remember you should always Gamble Responsibly
We use cookies to ensure that we give you the best experience on our website. If you continue to use this site you agree to allow us to use cookies, in accordance with our Terms & Conditions.Agree & Close