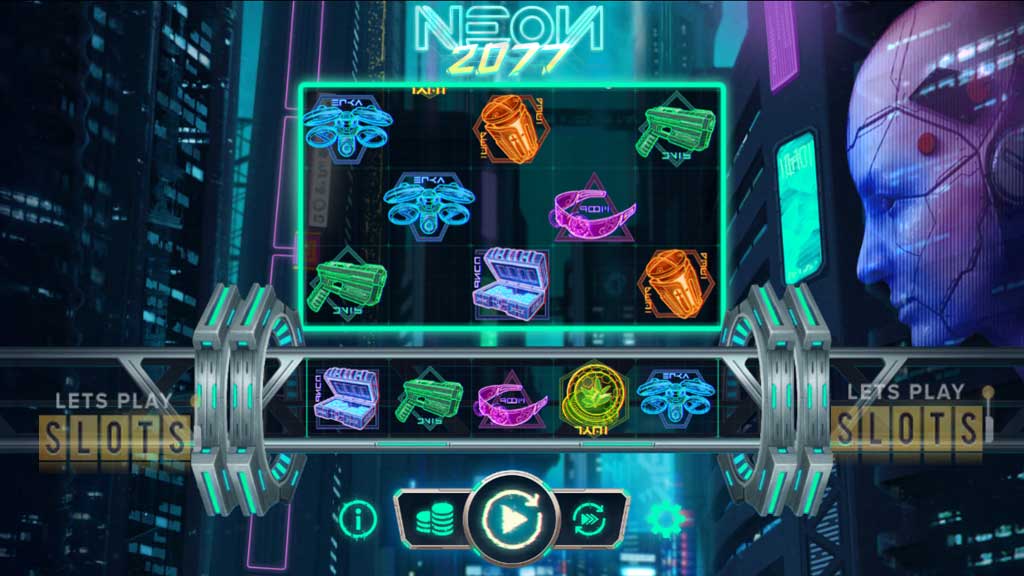 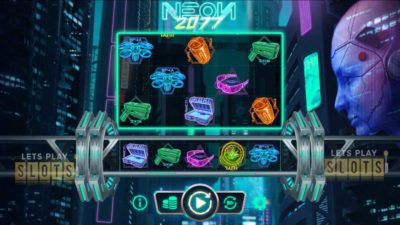 If you are one of those slot players that love sci-fi themes and keep wondering what the future will look like, you should check out the latest slot from OneTouch. The developer decided to be bold and experiment with their latest offering and they came up with “Neon 2077“, which is a cyberpunk-themed game that takes players and lets them experience life in 2077.

When players start this game, they will be treated to a vision of tall buildings, steel and glass which dominate the skyline. One the right side of the screen, a cyborg is there to remind people of the future setting of the game. The grid on display looks something holographic, which makes it look great. The soundtrack is also pretty futuristic with its beats.

The format of the grid is five reels and four rows. But the top three rows are the only ones active in the normal way. The bottom row spins horizontally which makes things different. The game offers 1,024 ways to win, which is pretty generous.

Players will be spinning the reels hoping to score winning combinations. The symbols on display are a surprising mix. This includes drones, laser guns, or electronic cases filled with precious data. The game has medium volatility which means that the games can reward players with a pretty good payout. This game has an RTP of around 96.23 percent.

The game is rather sparse when it comes to giving out special rewards. Unlike other slots, this game does not present players with multiple features. It only has one special feature which is called the Bonus Reel.

This is the reel at the bottom and it spins differently. Whenever a symbol on this reel matches one of the icons above it, it will result in a third identical symbol will appear on one of the blank spaces on the reel. This can provide players with a surprising way to win. But there are only low chances of this taking place.

Neon 2077 is a strange game. It looks great and works pretty well. The problem is that it can be pretty boring. With only one special feature, players won’t experience the excitement that other games can bring. While it can be fun, it is quite difficult to cross this barrier and go to the next level.

Those who like cyberpunk games, should definitely give Neon 2077 a few spins.

Hurray! There is a competition going between users of our site!
You have to do nothing, but browse out site, and win a daily prize. Click here to read more.
You current ranking:
Time Left: 8h 20m 28s