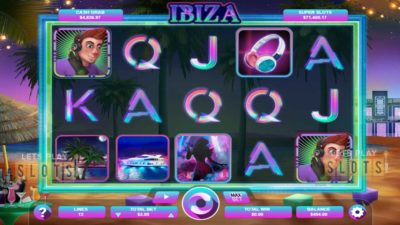 Ibiza is a well-known party destination that draws celebrities as well as the common man to enjoy life and relax at beautiful beaches. If you are looking for one of the coolest spots to relax and chill in Europe, then Ibiza is the place to be.

If you are longing for some fun in the sun but cannot make it happen, then you might want to choose the next best thing and that is to try the latest slot release from Arrow’s Edge. The new slot is called “Ibiza” and lets you enter the party atmosphere and see if you can win some money!

Players will be taken to the beaches of Ibiza when this game starts up, with the right sound and graphics to get you in the mood. Arrow’s Edge decided to experiment a bit and they allow players a chance to choose which reel set they can use.

The first reel set has five reels and 12 paylines. The second set has three reels with three paylines. This means that the game will never get old for players. If they get bored with one reel set, they can just move on to the other reel set.

The payouts and features are very different, too. The three-reel version will give out bigger wins but has more symbols. This makes wins less frequent. The five-reel set is much easier to win with but only reaches a maximum of 750 times the player’s stake.

Players are also treated to different special features with each reel set. For five reels, players have a special set of expanding wilds. These are the party girl and party boy symbols. When they land, they either expand horizontally or vertically. Players also immediately get respins when they score them. During those spins, players will have wilds locked in position.

Besides that, players will switch to the three reel set afterward to play three free spins with a 4x multiplier. For players who are on the three-reel setup, there are two special features. When players score two party girl symbols, the bonus round pops up. Players choose between two disks to see whether they bonus spins or instant cash prizes.

Lucky players who get bonus spins get a random amount of free spins. After that, players have a chance at three spins of the five-reel set, though the results are reduced. Overall, Ibiza is an interesting game and is definitely worth a spin or two!

Hurray! There is a competition going between users of our site!
You have to do nothing, but browse out site, and win a daily prize. Click here to read more.
You current ranking:
Time Left: 22h 30m 54s