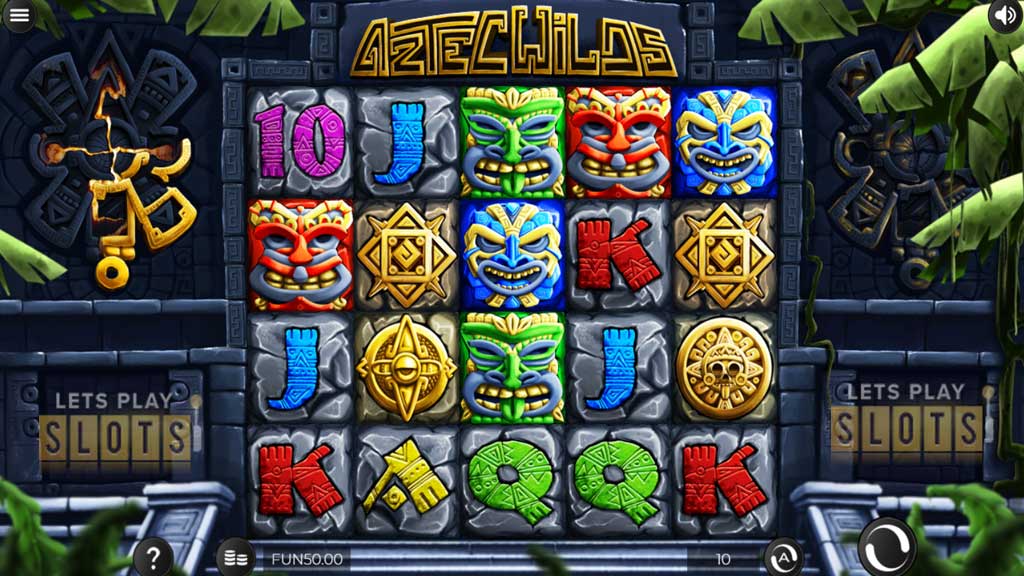 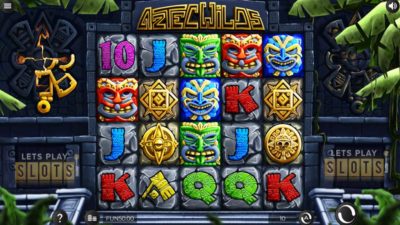 It is an adventurous experience when you enter a dense jungle and try to find a long lost temple which has a lot of treasure. Iron Dog Studio brings this theme to life in its latest offering, Aztec Wilds. This time around, players have stumbled upon an Aztec temple in the jungles of South America again. Finding and claiming its treasures is the goal of this game.

Players start the game by seeing the walls of the ruined Aztec temple.

The game immediately shows off the premise by displaying the symbols on the stone blocks of the wall. The game features five reels and four rows, with 1,024 ways for players to win.

As always, players are given the task of finding winning symbols. The game has a surprising amount of them. There are 10 basic symbols, three golden masks, and three gold motifs. If players want to win big, they will want to land five of the square shape, which will give players eight times their stake. The golden symbols act as wilds and special symbols.

Players should also look out for the two special features. The gold symbols are divided into three types. The basic gold wilds can act as any symbol and appear in the last four reels. There is also a sticky wild. It only appears in the middle reel and will stay even if it is part of a winning combination. Finally, the expanding wild takes over an entire reel when it shows up.

The other special feature to look out for is the free spins feature. Players trigger it when they have multiple tumbles. It starts at four successive tumbles and maxes out at eight. When the tumbles are done, players are rewarded with free spins. The minimum amount is 14 free spins. The maximum is 20 free spins and an additional 5x multiplier on the spin.

Overall, players will like this new slot as it is simple to understand and players can win up to 6,000 times their stake.

Hurray! There is a competition going between users of our site!
You have to do nothing, but browse out site, and win a daily prize. Click here to read more.
You current ranking:
Time Left: 13h 16m 26s
Gambling is for 18+ though some countries may have other restrictions...Remember you should always Gamble Responsibly
We use cookies to ensure that we give you the best experience on our website. If you continue to use this site you agree to allow us to use cookies, in accordance with our Terms & Conditions.Agree & Close