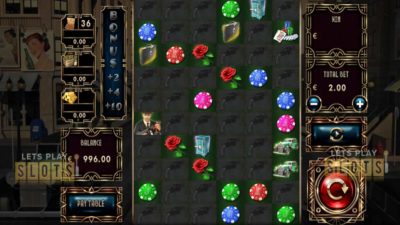 Red Rake Gaming has a great treat for gangster movie fans with their latest slot “Tommy Gun’s Vendetta“. This game takes players back to the 1920s has them facing off with the mob. Players will take to the streets help out Tommy Gun who is in search for vengeance.

Red Rake has done a good job in recreating a 1920s setting which is a city street that is full of cars. Players are then presented with a grid that completely dominates the screen while a cool soundtrack keeps the adrenaline flowing which help the slot stay attractive.

All of the action takes place on a grid that has six reels and ten rows. Thanks to the large grid, the developer decided to leave spots blank on the reels instead of filling everything up. Players will notice the inactive spots since they are filled with black guns. The active symbols are a nice mix. They include poker chips, briefcases, roses and mob cars. The mobster is the most rewarding symbol since it has a 50x payout on a six symbol combo. There are some very special symbols in play which provide great action when they get activated.

When it comes to the betting range, it is very limited. The betting range starts from $0.20 goes up to just $25. The limited range can discourage players who like to bet big but should be no problem for players who have limited funds. They might even welcome the limited amount as it will help them keep the reels spinning.

The game gets good when players score the right symbols. There is a progress bar on the site that tracks a player scoring specific symbols. These are tobacco, gold, and alcohol. Players who fill up a particular symbol will see all the black revolver symbols become that particular symbol. Additionally, there will be a range of multipliers that can go all the way up to x5.

There are also the three weapon symbols. They have different effects. The knuckle duster converts the two symbols to its left and right, the knife converts the symbols above and below it, and the Tommy gun changes four symbols anywhere on the grid.

Players can get up to 20 free spins by triggering five respins during a regular spin. Bonus symbols will also provide an additional respin. The reels will also be very different during these spins as they will be filled with more weapons. Tommy Gun’s Vendetta has an RTP of 95.3 percent.

Hurray! There is a competition going between users of our site!
You have to do nothing, but browse out site, and win a daily prize. Click here to read more.
You current ranking:
Time Left: 4h 47m 53s