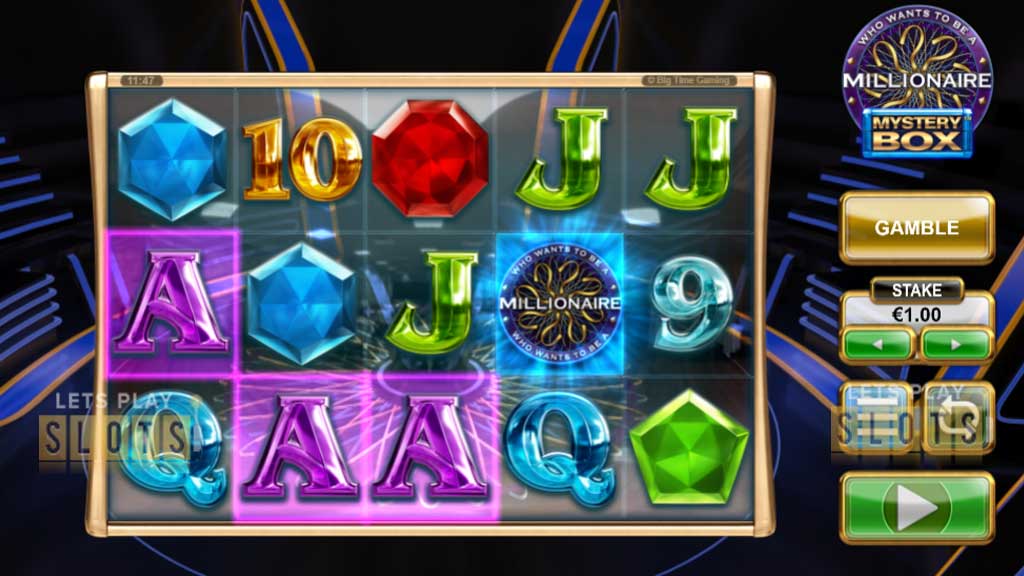 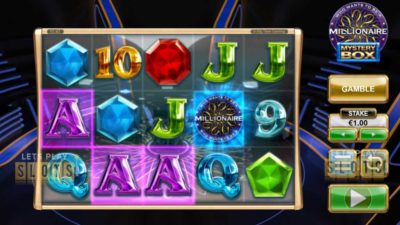 Slot developers tend to use the themes of popular game shows to reach out to a global fan following and give them even more. Big Time Gaming has decided to develop a new game around the popular reality show ‘Who Wants to be a Millionaire’. The new slot is called “Millionaire Mystery Box” and gives players a chance to win some really exciting prizes.

Players will definitely recognise the theme. When they start this game up they will be greeted by the show’s logo and familiar images that bring back memories of the show. Players will have five reels and up to 243 ways to win.

Like in all slot games, players are seeking to get winning combinations. The basic symbols include the A, K, Q, J, 10, and 9 royals.

The more rewarding symbols are the red, green, purple and blue gems. But players will only have eyes for the 2x Mystery Box Symbol. This functions as a wild symbol and substitutes for all symbols except the scatter. Players can also get double their win value when it is part of a winning combination. Multiple wilds can also stack their multiplier.

The game really shines with its bonuses though. One of the major ones is the Mystery Box Reveal feature. This is triggered at random and turns the Mystery Box symbol into any symbol, which includes the wild and the scatter.

The game also has the Gamble feature. This allows players get double their win value if they ever win. The only problem is that you have to pay extra to activate it. It is a classic feature found in many slot games and is a great addition.

With a potential win of up to 12,000 times their stake, they should at least give Millionaire Mystery Box a spin!

Hurray! There is a competition going between users of our site!
You have to do nothing, but browse out site, and win a daily prize. Click here to read more.
You current ranking:
Time Left: 19h 58m 42s