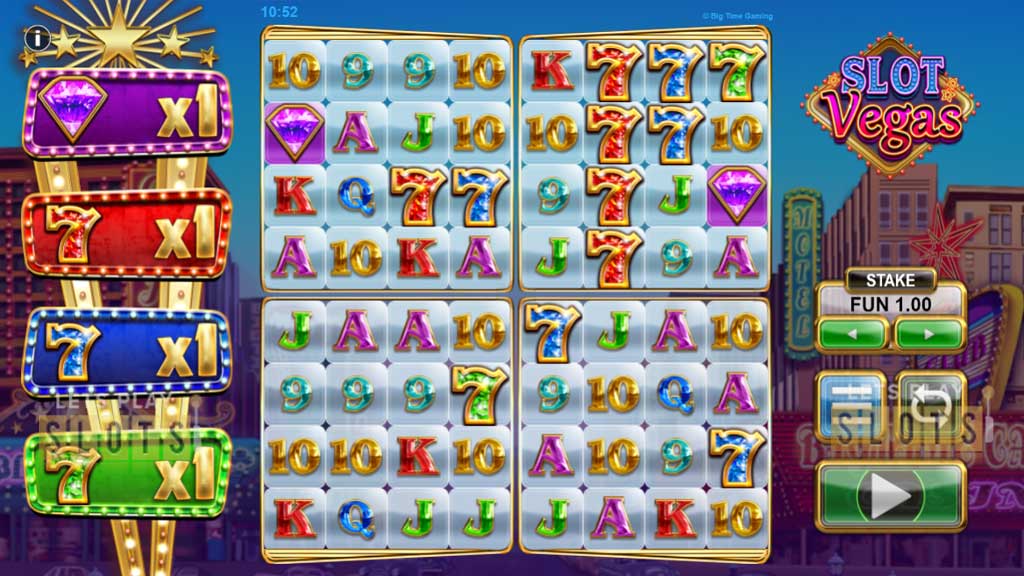 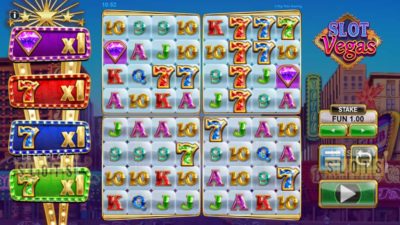 Big Time Gaming has come out with a unique slot titled “Slot Vegas Megaquads“. When players start this game up, they get to see Las Vegas strip in the background along with the iconic signboards that give this game a distinct Vegas charm

While most slot games have a single grid, this new game has four grids. Each of these grids have four reels and four rows, with 256 paylines each. This means that players will have 1,024 ways to win during each spin. Players are essentially playing four games at once. This is the Megaquads mechanic that adds a lot of excitement to each spin. The new Megaquads mechanic is another addition to Big Time Gaming’s Megaways and Megaclusters mechanic.

The betting range is pretty low in this game. Players can wager a minimum of $0.20 up to $20. The low value symbols are a mix of the card royals and the high value symbols are the jewel-encrusted 7s of different colors. The most valuable symbol is the purple diamond which only gives out 2x the player’s stake for the highest win.

Two wild symbols can act as substitutes for any other symbols and help to form winning combinations. The first is the basic wild and the second is the Rainbow Wild. This slot game is best suited for low stakes players who want to spend a lot of time spinning the reels without exhausting their bankroll. The game has an RTP of 96.59 percent which is impressive.

The basic payouts for this game is rather low but the bonus features balance things out. The maximum win with all the bonuses in play is up to 25,200x the player’s stake. There are three bonus features. One of the features involves the Rainbow Wild Bonus, which is activated by the Rainbow Wild. It merges two grids and can potentially give players up to 16,777,216 ways to win.

The other bonus is the multiplier feature. This is counted by an indicator on the left side of the screen. Every four of a kind win for a symbol adds to the multiplier. The next win for that symbol will get the bonus. They will only increase and will only reset during a free spin.

The gold VIP casino chip acts as a scatter. When players score four of this symbol, they get six free spins with additional three free spins for every additional scatter the players land. All bonuses are even better, with the win multipliers combining into one general multiplier.

Players who are interested in a new online slot experience, should give this new game a few spins.

Hurray! There is a competition going between users of our site!
You have to do nothing, but browse out site, and win a daily prize. Click here to read more.
You current ranking:
Time Left: 5h 58m 35s