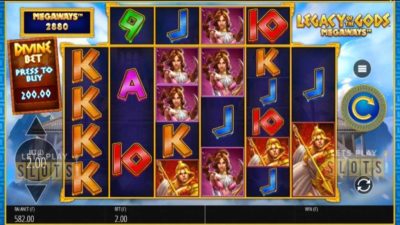 Blueprint Gaming has come out with a new Greek mythology slot theme with its latest released called the “Legacy of the God“s. In this new slot, players are seeking the favor of different gods and this game gives them all that they can handle. This is mostly because of the Megaways engine behind the game which gives them the opportunity to win big!

Players who start this game up will be taken to ancient Athens to experience the game. Misty mountain tops in the background complete the graphic design of the game. Combined with nice background music, players will eager to play this game and see what is in store for them!

The game itself uses the standard Megaways system. The game has six reels and seven rows. Since this is a Megaways game, there are up to 117,649 ways to win. Players will have ten symbols to play with. There are the card royals, starting from 9 to A. These are the low-value symbols. Then there are the four gods: Athena, Ares, Hera and Zeus. Players will want to score one of these symbols for a big payout. The RTP is pretty decent at 96.5 percent should keep spinning for a while.

The most valuable symbol in the game is Zeus. Players who get six of him will get 50x their stake. Additionally, players only need two to get a payout. Players should also be on the lookout for two special symbols. One is the temple wild symbol, which allows for easier wins, and there is the scatter symbol, which gives players free spins.

The game is full of special features. For one, there is the cascade feature. Players will love the fact that their wins can be rewarded by more wins. But the real draw is the Mystery Symbols feature. Players will randomly see these mystery symbols appear and they can transform into various symbols that are available. The only exceptions are the scatter and wild symbols. These can make it easier to win.

Finally, there are the scatter symbols. Players will need four scatters to trigger free spins. They will be given a choice with the number of free spins and the level of multipliers and volatility. The less free spins, the more volatile the game becomes. Players can also get free spins by using the Buy Bet feature. This just means players will need to bet a large amount to play free spins.

Overall, Blueprint Gaming‘s Legacy of the Gods is a fun experience and is definitely worth a few spins!

Hurray! There is a competition going between users of our site!
You have to do nothing, but browse out site, and win a daily prize. Click here to read more.
You current ranking:
Time Left: 16h 24m 28s