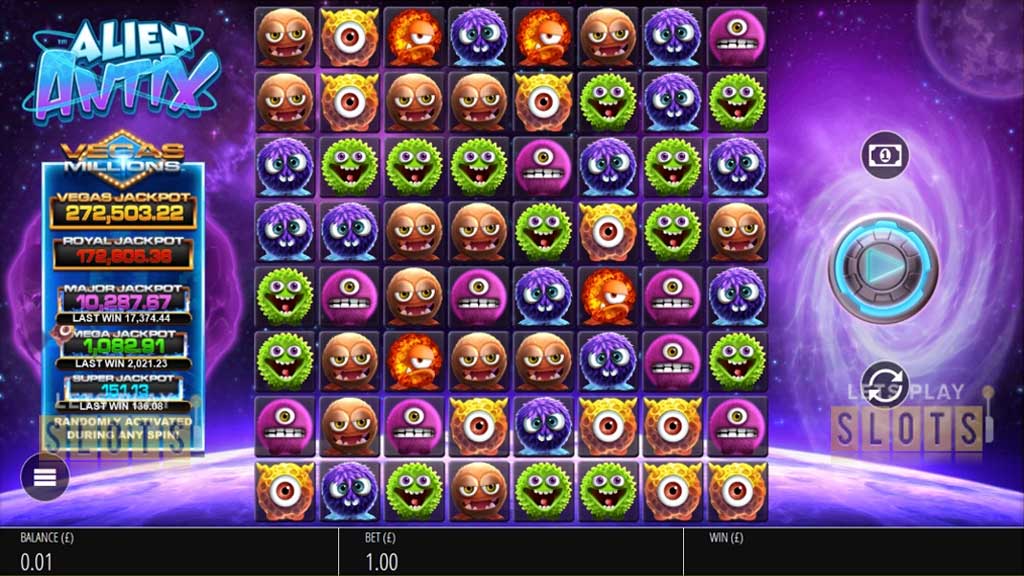 Blueprint Gaming Takes You Into Outer Space With “Alien Antix” 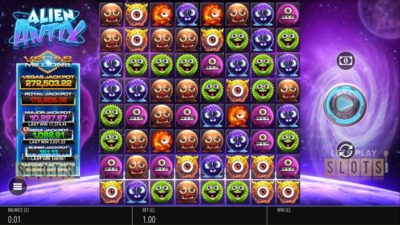 There are millions of people around the world who still wonder if there are aliens are out there.

Blueprint Gaming looks to answer this question in their latest slot game called “Alien Antix“. This game takes players into outer space and lets them encounter various aliens out there and gives them a chance to come out on the winning side!

Players will have no trouble figuring out the theme of this game. Blueprint Gaming has done a great job with the graphics.

The background is full of galaxies and stars and the music also gets the mood right for players to start spinning.

Alien Antix uses a large grid for its play area. Out in space, players are presented with an eight by eight grid that allows for a lot of wins. This is mainly because the game uses a cluster system. Instead of lines, the game checks for symbols that are adjacent to each other. The game has a minimum of five matching symbols to trigger the win. A maximum of 25 symbols is for the biggest combination.

The game uses six different alien species. For players who may get confused, the best way to tell them apart is by looking at their colour and the number of their eyes. They all pay out well but the most valuable of them can give out 100 times a player’s stake when the maximum number of symbols is scored.

This game has several special features that makes it something more than just a basic slot game. For one, the game has cascading reels. Players will be able to get a new set of symbols when they get a winning combination. The old symbols are removed and new symbols are dropped down. The new position can potentially give players new wins.

Another special feature is the colossal symbols. Sometimes an extra-large symbol pops up during the game. Thanks to its large size, the symbol has a bigger chance of winning since it touches more symbols.

The game also features a special non-alien icon. It acts as the game’s wild and bonus symbol. When players score with it, a multiplier is provided to them. Besides that, when three of them are scored, eight free spins are given, with a colossal symbol on each drop. Overall, the game is pretty fun and worth a spin or two!

Hurray! There is a competition going between users of our site!
You have to do nothing, but browse out site, and win a daily prize. Click here to read more.
You current ranking:
Time Left: 11h 47m 11s