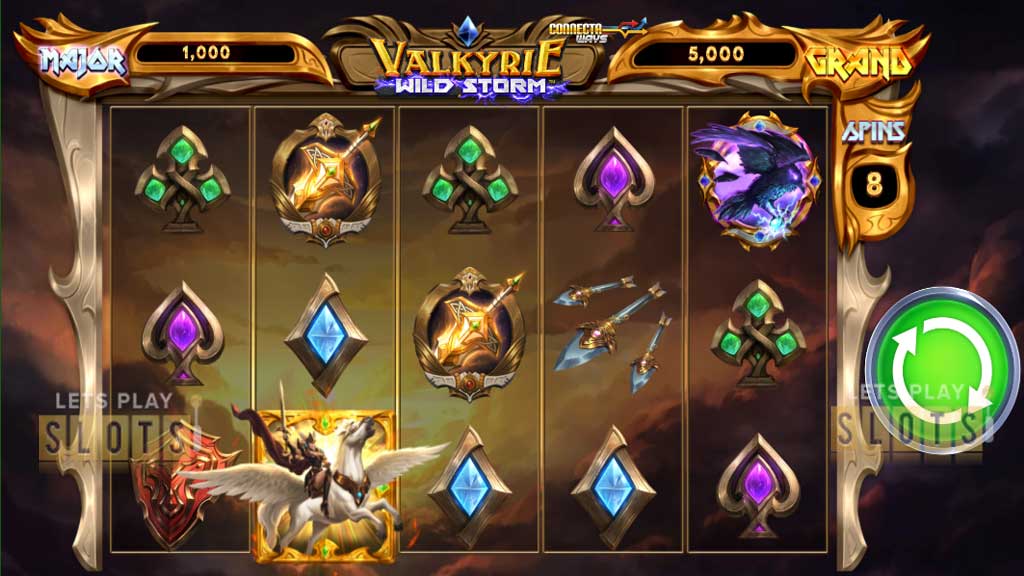 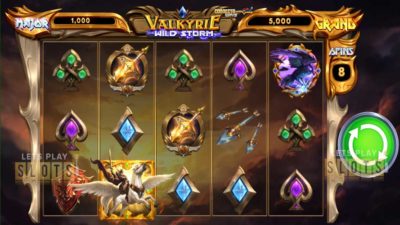 Valkyries are a major part of Norse mythology. They ride out and choose the worthy dead to take to Valhalla. This is why they are one of the more recognizable figures in the Norse myths. Boomerang Studios’ decided to use this as the theme for their new offering: “Valkyrie Wild Storm“. Players who want to ride with these mythological beings should give this slot a try.

Players will be impressed with the great graphics that this game brings to the table. The background is the dawning sky and the grid is all gold and shiny. The game is played on a five by three grid with 99 paylines. This game has an impressive RTP of 96.79 percent.

When it comes to gameplay, the goal is to score at least three of any one symbol to get a win. There are two sets of symbols for players to try and score. There are the usual card suits that should give players some basic prizes. There are more valuable symbols that are connected to Norse mythology: shields, spears, swords, ravens and the entrance to Valhalla.

Players can bet a minimum of 30 coins but they can go high with a 9000 coin maximum. If a player wins with the max wager, they can have a big jackpot on their hands. It also helps that the game has two jackpots: Major and Grand. Players then have a chance to win 13293 times their stake.

The game has a set of special features that makes it standout. For example, the Valkyries appear in the game. Every time they show up, they leave behind a gold border. Any symbol that lands in the borders become Wild symbols.

Wild symbols act as all other symbols but they also have special features. The game has two types. The basic one does nothing special besides being a substitute. The other type is the Valkyrie wild that will award a jackpot if it is part of a winning combination.

Every ten spins, the Valkyrie Wild Storm appears. All golden-bordered slots will turn symbols into wilds and the fifth reel has a chance to turn wilds into a Golden Wild. Golden Wilds are the only way to earn a Grand jackpot.

This game is not only fun to play but also gives you a chance to win some big payouts. Do check it out when it arrives at your favorite online casino.

Hurray! There is a competition going between users of our site!
You have to do nothing, but browse out site, and win a daily prize. Click here to read more.
You current ranking:
Time Left: 5h 46m 54s