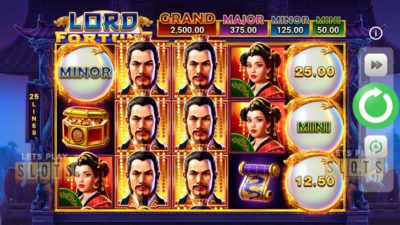 Asian players are showing a lot more interest in slot games these days than in times past.

Slot developers have recognized the demand from the Asian market and are now coming out with more Asian themed slots.

This is a game about the legend of the Dragon Bell and it takes players to a Chinese temple at night. The developers have done a good job with the graphics which brings this game to life.

The game presents a grid that has the standard five reels and three rows. There are 25 paylines to win and a pretty decent betting range that will appeal to low stakes and mid stakes players. Starting with $0.25 and going up to $60, it will give players a good chance at a decent payout when they hit a jackpot.

You will see that the developer has loaded this game with quite a few special features that makes the game very interesting. The main one is the Hold & Win feature. If players do well with this feature, they can get a chance at the Grand Jackpot worth 1000x. Players need to land six bonus symbols for this to trigger.

Players then get to play on a reel set where only bonus symbols and blanks appear. They will then have three spins to fill up the grid with their reward which is determined by the number of symbols they land and hold. Players who fill all the reels get the Grand Jackpot. Players can also have the chance at basic free spins by scoring three or more Dragon Bells. They will then get six free spins which they can trigger again and get another three spins.

If you like playing Asian themed slots, go ahead and check out Lord Fortune: Hold And Win today!

Hurray! There is a competition going between users of our site!
You have to do nothing, but browse out site, and win a daily prize. Click here to read more.
You current ranking:
Time Left: 1h 28m 26s