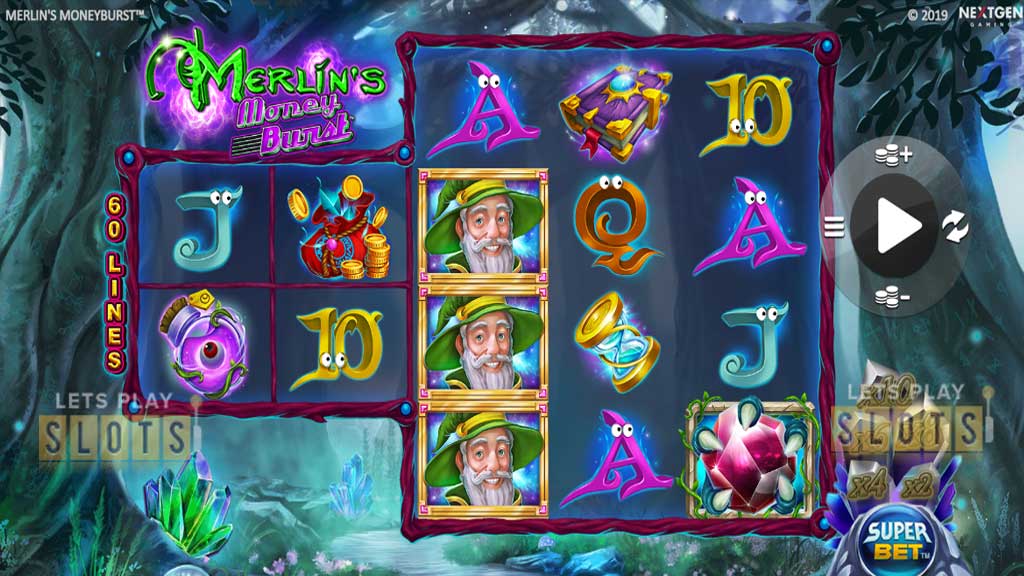 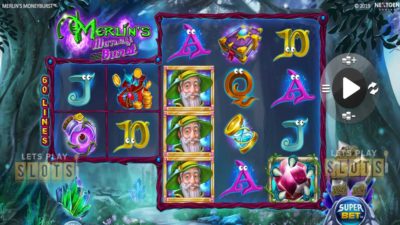 NextGen Gaming has made ‘Merlin’ a popular character in its slot games. The company decided that it was time to reintroduce Merlin in its latest slot game called “Merlin’s Money Burst“.

Developed in cooperation with WMS, it uses the Money Burst game engine to deliver a unique gaming experience.

The game starts off with players being shown an enchanted dark forest in the background as the reels are presented.

There are five reels but there are a variable number of rows. The first two reels only have two rows. The last three have four.

The game works pretty much like your usual slot game. Players try to match symbols to get winning combinations. There are several low-value symbols that are represented by the cards A, K, Q, J and 10. There are eyes on these symbols.

There are also several high value symbols. These include hour glasses, money bags, potion bottles and spell books. Spell books are the most valuable symbol. They return 8.33 times of a player’s stake if a player gets five of them on a payline. There is also the wild Merlin symbol. It can stand in for all other symbols except for the scatter. They can give 83.33 times of a player’s total stake if five appear on a payline.

The game has the SuperBet feature to enhance player wagers. Depending on the enhancements that players can get, players can win pretty big. There are five levels and the highest level can add a lot to the player’s stakes. However, at level five, players get a 10x multiplier if the Merlin symbol is the part of the winning combination.

Players also get additional bonuses Merlin’s Held Re-Spins feature, Merlin’s Free Games Feature, and Merlin’s Wild Spins Feature. The Held Re-Spins is triggered when reels one and two have matching symbols. Players can then get five respins with the first two reels held.

The Merlin’s Free Games feature is triggered when three scatters are scored. This give 10 free respins and transforms some symbols into wilds. Players can get this again. Finally, if players get a combination of triggers, they get respins and the first two reels become wild.

Overall, Merlin’s Money Burst can be a very profitable game for interested players. The cool graphics, great gameplay and big bonuses make it a must try when it arrives at your favourite online casino.

Hurray! There is a competition going between users of our site!
You have to do nothing, but browse out site, and win a daily prize. Click here to read more.
You current ranking:
Time Left: 5h 27m 48s