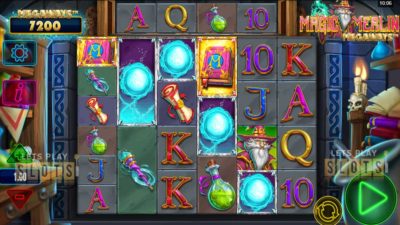 The name Merlin is now synonymous with magic. As the world’s most well-known wizard, Merlin has become the poster-boy for various magical games. Storm Gaming Technology has decided to use Merlin as its main character in its latest slot offering called “Magic Merlin Megaways“. In this game, players will work as an apprentice to Merlin.

When players start this game, they will be immediately taken to Merlin’s laboratory. The setting is filled with interesting and weird items which include various books, magic potions and a skull with candles on it. The background music is rather catchy and will keep players engrossed from start to finish.

The game features six reels. Like all Megaways games, the rows are irregular. They can range from two symbols to seven symbols. Players will be hoping to get symbols like a scroll, a flask of magic potion, a wand and Merlin. Besides the ordinary reels, there is also a reel that spins horizontally. With all of these possible options, it is not surprising that the game has up to 117,649 ways to win.

Players can wager a minimum of 10 cents per spin. The maximum is 100 euros. With medium variance, players are not going to win big. This Storm Gaming slot has as RTP of 95.71 percent.

The game also has some special additions that make the gameplay a bit more surprising. For example, players can potentially create a cascade of wins. When a winning combination is scored, players will see the symbols disappear and more symbols drop from above. This can create new combinations which is fun. As long as new combinations appear the cascade continues.

Additionally, the game offers the Mystery Card. These symbols sometimes appear at the end of a spin. They then become a random icon to help complete a combination. The game also has a free spin feature. The Book of Spells is the game’s scatter symbol and at least four are needed to trigger the free spins. Players get 12 and the cascade features will be active.

Whenever a win is scored, players will get a multiplier for future wins. There are no caps on the multiplier so as long as players win, they can get bigger wins. Additionally, players only need to score three scatters to get 12 more spins.

Overall, the game is a fun little diversion and the Megaways features make it even more enjoyable.

Hurray! There is a competition going between users of our site!
You have to do nothing, but browse out site, and win a daily prize. Click here to read more.
You current ranking:
Time Left: 23h 20m 23s
Gambling is for 18+ though some countries may have other restrictions...Remember you should always Gamble Responsibly
We use cookies to ensure that we give you the best experience on our website. If you continue to use this site you agree to allow us to use cookies, in accordance with our Terms & Conditions.Agree & Close