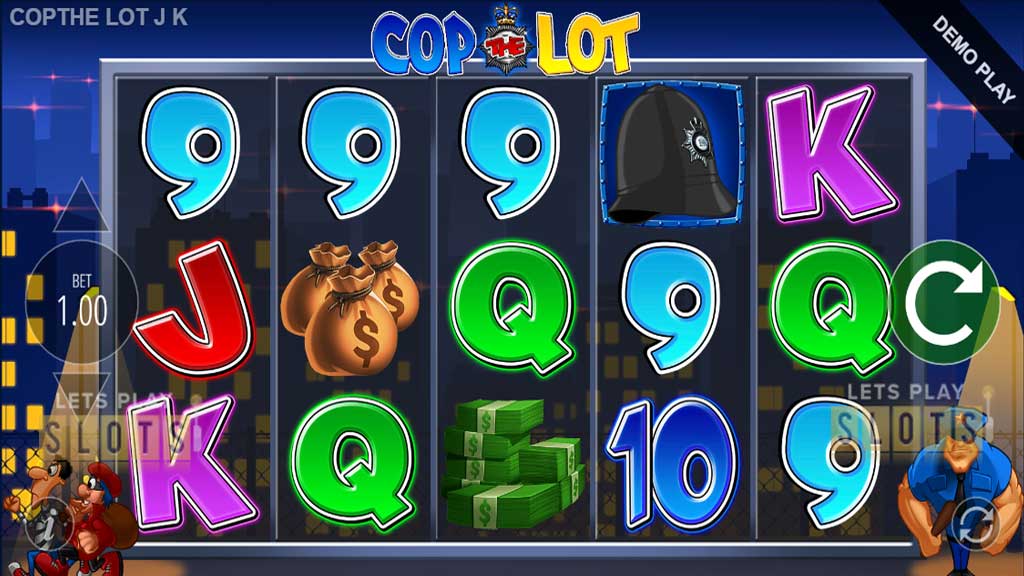 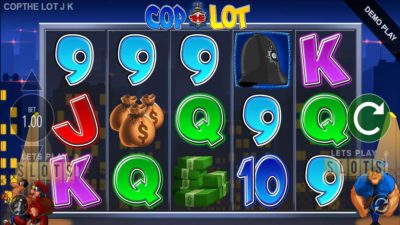 Cops and Robbers is a popular game among children and a popular theme with the adult world as movies, TV shows and books all borrow from the theme of good versus evil.

Blueprint Gaming is bringing the theme to life in their latest offering ‘Cop The Lot’. This game welcomes players to a city at night and a look at what cops and robbers do best. All of this is presented in cartoon-style graphics and a fun little soundtrack.

Cop the Lot has five reels and 20 paylines. That sounds pretty basic but what players are really after is the progressive jackpots that the game features. The game has the same base features of most slot games ad players will need to score combinations to win.

This slot features the A, K, Q, J, 10 and 9 card suits as its low value symbols. The more valuable symbols are the stacks of cash, money bags and the Cop the Lot police badge. The badge is the most valuable symbol. If players get five of it on a payline, they get 25 times their stake.

The game also has dynamite as its wild symbol. It replaces all symbols except the scatter. Players who get five of it on a payline will get 500 times their stake. Additionally, players will get double their winnings if it is part of a winning combination.

The real draw of Cop the Lot is its attractive bonuses. First, there is the Usual Suspects Bonus feature. Players trigger this when they get three or more Usual Suspects scatter symbols anywhere on the reels. Players then have to pick one suspect from three to get a random bonus. Players can get up to 500 times their stake.

Another feature is the Cops and Robber Bonus feature. Players trigger this when they get three or more police hat symbols. Players are then taken to a game board and they try to collect as much multipliers and key symbols as possible by rolling dice and moving their piece on the board. The feature ends if the cop catches up to the player’s symbol on the board. Players who collect three keys will get further bonuses.

Finally, there is the Smash ‘N’ Grab Free Spins Bonus. Players who get three Safe symbols will be given a chance to choose a safe. This will determine how many free spins they will get. During these free spins, there are more wild and bonus symbols on offer.

Overall, Cop the Lot can be a fun and profitable game without even taking into account the progressive jackpot on offer!

Hurray! There is a competition going between users of our site!
You have to do nothing, but browse out site, and win a daily prize. Click here to read more.
You current ranking:
Time Left: 9h 53m 35s