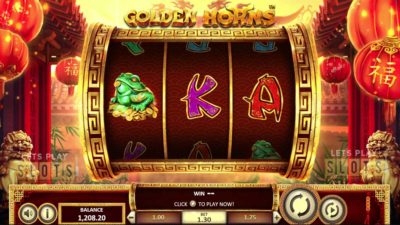 The Chinese New Year (CNY) is fast approaching and over 1.5 billion people will celebrate the year of the Ox. One of the favorite pastimes for Chinese players during CNY is to play online casino games. Betsoft is making these celebrations the focus of their new slot offering titled “Golden Horns“.

In this game, players are immediately taken to a fancy golden altar to test their luck during the Chinese New Year.

The first thing that players will notice when they start this game is a large amount of red and gold in the décor. The reels are flanked by two lion statues and the Chinese theme is very recognizable.

Players are then presented with the three reels and a single payline. While the single payline is worrying, the RTP of 96.26 percent makes up for it.

The game also has a limited range when it comes to wagers. The minimum that players can bet is $0.20. That’s pretty standard. However, the maximum is only $4.50. No high rollers are going to be playing this game due to the low betting range.

However, the low betting range does work for the game since there are only three reels. Players who like this game will be betting a lot and the low maximum allows them to stretch out their bankroll.

The game features some cool symbols on its paytable. There are the card royals and then there are the thematic symbols like the koi fish and frog. The most valuable symbol for this game is the Golden Ox. It is the game’s Wild and can replace any of the regular symbols. Players can win 288x their stake if they score three of these on the payline.

The Golden Ox symbol also triggers the game’s special features. Players who score a set of it, get to see the Charge of the Wild Ox. The large payout is already known but the game will also give players a big multiplier. The max that players can get if they get super lucky playing Golden Horns is 25,344x their stake. That is an incredible amount and should be tempting for Chinese players who want to start CNY on a winning and lucky note.

Overall, players will like Golden Horns for the simplicity that it brings to the table along with the high payouts it delivers!

Hurray! There is a competition going between users of our site!
You have to do nothing, but browse out site, and win a daily prize. Click here to read more.
You current ranking:
Time Left: 9h 32m 48s