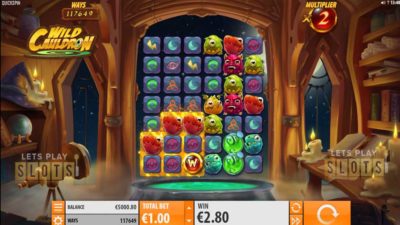 Witches and magic continue to fascinate millions of people around the world. The image of witches brewing their magical potions in a bubbling cauldron is a major image in folklore.

Quickspin has decided to use this as their theme in their latest offering called “Wild Cauldron“. Players will have a chance to win big as the symbols bubble up from the depths of the cauldron.

Players start this game with a very cartoony-looking cauldron that has symbols floating in their midst. The game itself features six reels and 4.096 ways to win. But this will increase thanks to the special features that the game has.

A great thing about this game is that players will immediately notice is that there are no card symbols. All of the symbols present are unique to the game. The low-value symbols include symbols that are linked to witchcraft. This includes blue moons, green swirls, pink eyes, red pentagrams, orange hazard signs and yellow lightning bolts.

What players want to score is one of the five monsters. They are the most valuable with the pink monster being the most valuable. Players can get 3.5 times their stake when they get six in a combination. There is also the W symbol, which acts as the wild. Having it as part of a winning combination increases the win multiplier by one. The game has a maximum of 7x as its win multiplier.

The game also has some special features that make winning easier. One of them is the Locking Symbol Tumble feature. Players who get a winning combination will lock those winning symbols and they go to the bottom of the reels. Then new symbols will drop down from the top. This can mean new combinations can form.

Besides that, the number of ways to win increases. This is done by having more rows added for every win. The maximum number of rows is eight. This means that a player can potentially have 262,144 ways to win. The row number returns to the original state after players stop winning.

Players can also trigger the Free Spins feature. This is done with the potion bottle bonus scatters. Players will need to score four of them and they can get from eight to 12 free spins. The free spins will have both special features active and activate additional two free spins for each two scatters that appear.

Overall, this game’s RTP of 96.09 percent combined with its special features make it a must-try!

Hurray! There is a competition going between users of our site!
You have to do nothing, but browse out site, and win a daily prize. Click here to read more.
You current ranking:
Time Left: 22m 53s