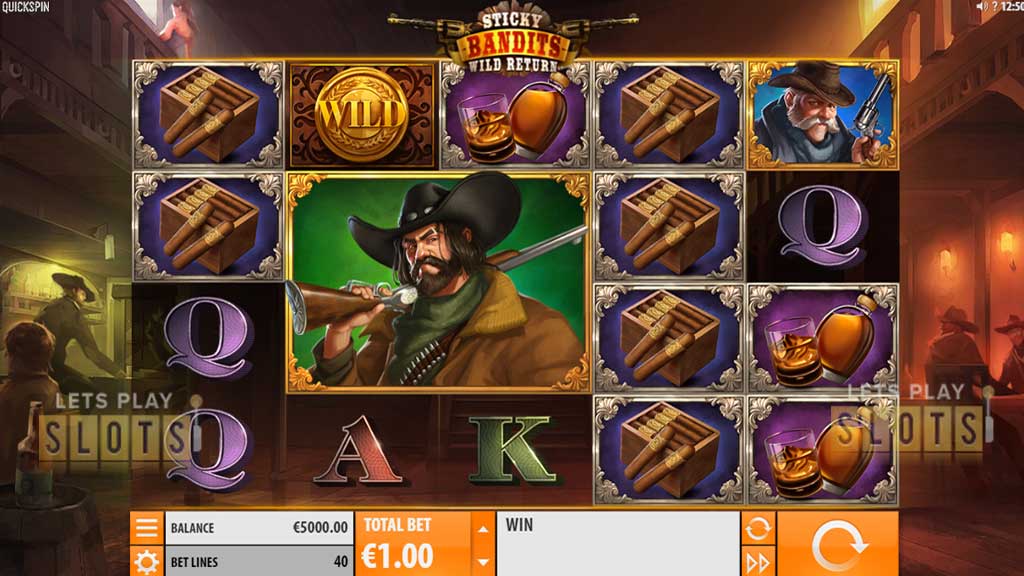 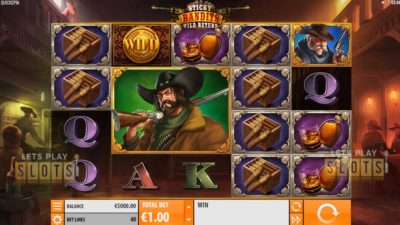 The original “Sticky Bandits” slot was a big win for Quickspin. The Western theme and great gameplay turned out to be a hit with slot lovers from around the world. Now, Quickspin wants to give players an enhanced version of Stick Bandits by coming out with a sequel.

It’s back on the road for players who want to hunt down outlaws with the arrival of “Sticky Bandits: Wild Return” into town. The game delivers everything that the original had and then some.

Players are greeted by crisp animation as the game’s intro plays and then get taken into the smoky tavern where the bandits lurk.

The art is better and brighter while the music is a bit wilder. The game still has five reels and 40 paylines and the basics are pretty much the same.

For low-value symbols, there is the set of A, K, Q and J royals. Players who want to earn more will look for the more valuable symbols. This includes cigars, whiskey tumblers and the three bandits they are looking for. The female bandit is the most valuable. Players who score five of her will get ten times their stake. The game even has a wild symbol that is just as rewarding and replaces all symbols except the sticky wild and the bonus scatter.

Winning is made easier by the presence of the Massive Symbols feature. Sometimes symbols will occupy 2×2 and 3×3 spaces. These large symbols make it easier to win the more expensive combinations.

The game features some special bonuses for players so that they can get some big wins. First, there’s the Quick Slot Bonus feature. The Quick Slot symbol can sometimes show up on the fifth reel. When this is triggered, players get up to three spins on the Quick Slot Machine.

The Quick Slot machine is a mini game that has three reels and four symbols. There are a variety of winning combinations but the most profitable one is three lucky red 7 symbols. This gives players 500 times their stake.

Players can also get the Lucky Shot Free Spins Bonus feature. This is triggered when three bonus symbols are scored. Players get seven free spins and they start bandit hunting. During these free spins, symbols transform into different ones. This makes it both easier and harder to win.

Overall, Sticky Bandits: Wild Return is a blast to play. The bonuses are decent and the game looks great!

Hurray! There is a competition going between users of our site!
You have to do nothing, but browse out site, and win a daily prize. Click here to read more.
You current ranking:
Time Left: 11h 4m 42s