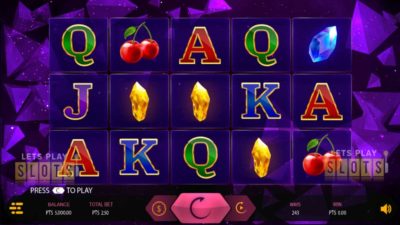 Most slot developers focus on coming out with slots that are packed with special features that appeal to the modern generation of players.

Every now and then a slot developer will release an old school game. Expanse Studios recently released a classic themed slot with a modern twist.

The new game is called “Odd One Out” and takes players back in time when slot games had no bells and whistles to it. Players are presented with a purple background and blue reels.

The game features a grid with five symbols and three rows. There are 243 ways to win for this game, which is pretty impressive.

The betting range for the game on the other hand is not very impressive. The betting minimum on each spin is $0.25 while the maximum is limited to $25 which is unfortunate because mid-stakes and high stakes players will look elsewhere.

Like any modern slot game, the game presents players with some special features. The game’s logo symbol is the game’s Wild symbol. It makes it easier to win since it can substitute for all other symbols except the scatter. The great thing about the logo symbol is that when it appears, there is a chance that it expands. When this happens, there are even more ways to win.

The Wild also offers additional bonuses as players also get the chance to respin the reels after the wins.

The game also features a nice reverse cascading win feature during this respin. When a player wins, the non-winning symbols will be removed from the grid and new symbols will drop down in the hopes of a big win.

There is also a scatter symbol. For players who score three or more scatters in play, free spins will be given out. The number of spins depends on how many scatters are scored. The minimum is 10 free spins. The maximum is 25 free spins. Additionally, all the winnings are multiplied by two. This game has an RTP of 96 percent.

If you like playing classic slot games, go ahead and give the Odd One Out a few spins!

Hurray! There is a competition going between users of our site!
You have to do nothing, but browse out site, and win a daily prize. Click here to read more.
You current ranking:
Time Left: 21h 19m 59s