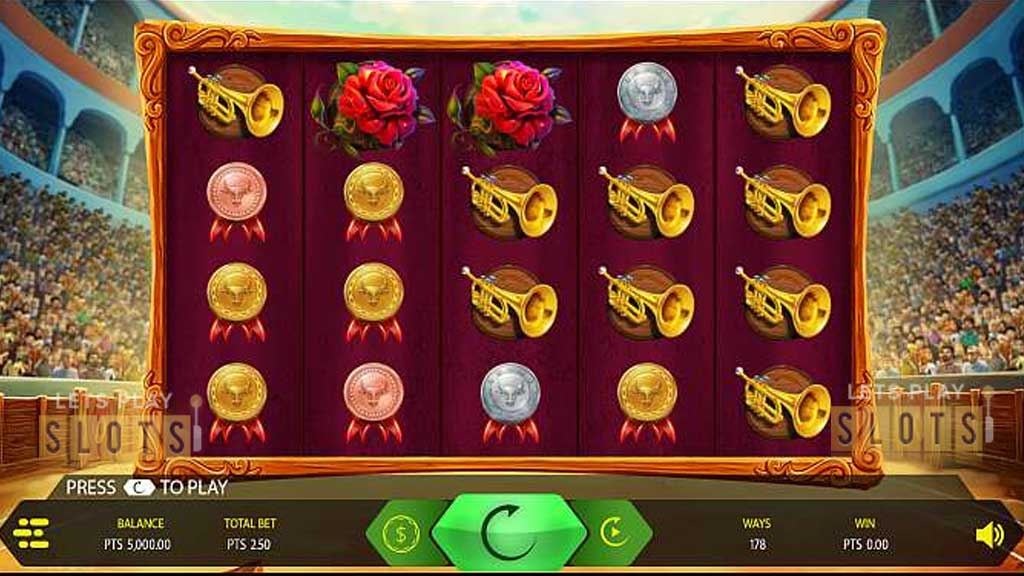 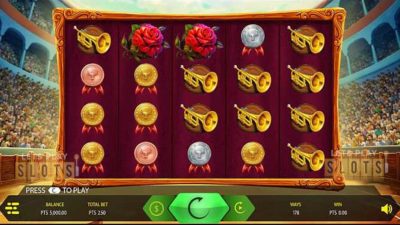 Bullfighting is considered as a sport in certain parts of the world. The art of fighting a bull in an arena with only swords and a cape can be challenging but controversial task. Expanse Studios takes players right into to the bull fighting ring for an adrenalin pumping experience.

We must point out that the developer has taken out the blood and gore factor in order to give players with weaker stomachs a chance to try out bull fighting in its latest slot “Wild Corrida“.

Players are taken directly into the arena and there is no mistaking what you are getting into as the developer has done a great job with the graphics.

Wild Corrida has five reels and four rows and gives players up to 178 ways to win.

While most developers use a combination of card royals and thematic symbols, Expanse Studios has decided to do away with the card symbols and just stick to symbols that are common in the bull fighting arena. Some of the symbols include three low-value medals, roses, a trumpet and arena.

The betting range starts from $0.25 and goes all the way to $25.00. It is pretty low when it comes to wagers but the high RTP of 96.3 percent helps out a bit since players have a good chance of winning. The biggest cash jackpot is $1,500 which is good enough for a mid-range slot game.

While the basic game can be a bit boring, the special features help add a lot more excitement. This game has two special symbols. The first is the Wild Bull which makes winning easier by substituting for all other symbols except the scatter. The big difference is that it only appears on one reel on the grid – the fifth one. When it lands it starts offering players respins. During each spin, the bull moves one step left. The respins end when the bull reaches the first reel.

The second special is the scatter symbol which shows up in the form of a bullfighter. This symbol offers players a chance at free spins. Players who score a set of bullfighters get three respins. The interesting feature about the bullfighter is that it affects the bull. If a bull appears at the same time as a bullfighter, the bull charges the bullfighter. It leaves Wild symbols behind it.

Some multipliers can pop up from the rampage. The bull will attack all scatters so it will move around the screen leaving potential winning combinations. The more bullfighters there are, the bigger the win.

If you want a virtual experience of what its like to step into an arena with a bull, go ahead and give Wild Corrida a few spins.

Hurray! There is a competition going between users of our site!
You have to do nothing, but browse out site, and win a daily prize. Click here to read more.
You current ranking:
Time Left: 6h 16m 45s