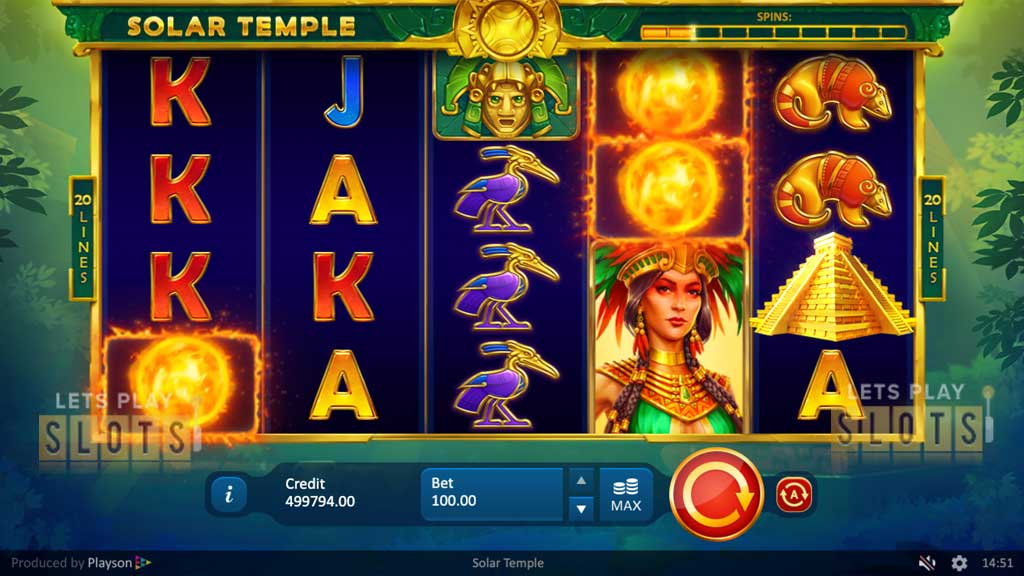 Experience The Wonders of The Aztecs In New “Solar Temple” Slot 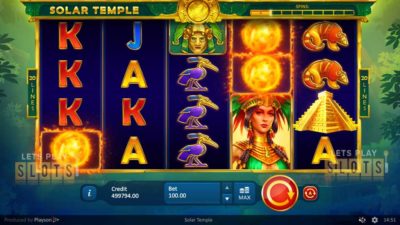 The ancient Aztecs worshiped a number of different gods and goddesses. One of their main gods was the god of the sun, who needed a daily sacrifice to come back every day. Playson has decided to use this theme for their new slot called “Solar Temple“, which gives players a crack at some big jackpots!

When players start this game up, they are taken to the dense jungles of South America. Playson has done an excellent job as the graphics are sharp and the sounds set the mood for the game. In the midst of all the greenery, the grid is displayed, with Aztec designs in gold.

The setup for the grid is five reels with 20 paylines. This is a pretty standard set-up for any slot game. Solar Temple features two sets of symbols. The card royals are the low-value symbols and do not have a very good return. The real prizes of the game are with the Aztec symbols. Players who want to win big will want to aim for the priestess who has the biggest reward. Besides being very valuable, the priestess symbol also takes over an entire reel, which makes it easier to win.

The basic game of Solar Temple is nothing to write home about but the special features do make the game a lot more interesting. First, there are the bonus spins. These are the basic free spins that people get when they score the Temple scatter symbol. Players will be able to get 10 free spins and the sun symbols will become wilds. They will also stay in place until the end of the free spins.

Secondly, there is the Flaming Frames Feature. When players spin the reels, they will want to collect as many sun symbols as possible. When they land, the space where they landed gets a flaming frame and these last for ten spins. If another sun symbol lands in the spot, the game gives players a multiplier. On the last spin of the ten spins, the framed positions will become wilds.

Playson has done a good job in merging great graphics and interesting gameplay which makes it definitely worth a spin or two! The main obstacle is the low payout with the basic game. However, the special features make up for the lower RTP. Players should give it a try as they are bound to have a fun gaming experience!

Hurray! There is a competition going between users of our site!
You have to do nothing, but browse out site, and win a daily prize. Click here to read more.
You current ranking:
Time Left: 11h 49m 5s