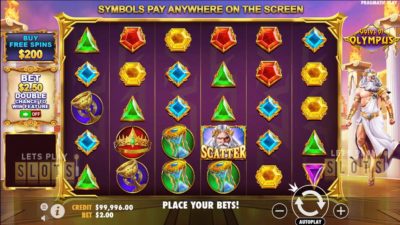 If you know a little about Greek mythology, you will know that Mount Olympus was where all the Greek Gods lived. Pragmatic Play has made it the setting for its newest slot offering, “Gates of Olympus“. Players are taken to the holy mountain where they are greeted by Zeus and get access to a Greek temple.

Players are presented with a grid that is kept on the side, between two pillars. The grid has six reels and four rows. The game features a surprising payline sequence. It is the Pay Anywhere feature.

This means that players will score as long as the symbols appear on the grid. This leads to amusing consequences. The game’s RTP is pretty good at 96.5 percent.

Considering the max win is at 5000x the player’s stake, the high chances of scoring should be attractive to any player.

The betting range for the game is pretty nice. Players start at $0.20 and then go all the way up to $100. That is a very generous maximum wager. It should also be attractive to high rollers who want to win big.

Surprisingly, there are no card symbols involved in this one. There are only gemstones, rings, hourglasses, goblets and crowns. This is a good mix and Zeus is part of it all as Zeus acts as the game’s scatter. The gemstones are the least-rewarding symbols while the crown pays out 50x and is the most rewarding.

The Pay Anywhere feature is great but there is also another feature that makes it a very rewarding mix. This is the Tumble Feature. When a player wins, the winning combination disappears and new symbols come down from the top. The result might mean more winning combinations.

Besides that, there are multiplier symbols. They appear randomly and they can activate in the same way. When this happens, players can get multipliers up to 500x. That is pretty big and can happen in both regular and free spins. The great thing about it is that these multipliers stack.

Another special feature is the Ante Bet. Players who want to see more of Zeus have to pay an additional 25 percent of their stake. Finally, players who score four or more of the scatter symbols will get 15 extra spins. During these spins, multipliers stack. This means a multiplier is combined with previous multipliers, creating big jackpots. Additionally, players can get five more free spins for every three scatters scored.

If you like big wins and a lot of excitement, go ahead and give Gates of Olympus a few spins today.

Hurray! There is a competition going between users of our site!
You have to do nothing, but browse out site, and win a daily prize. Click here to read more.
You current ranking:
Time Left: 6h 17m 25s