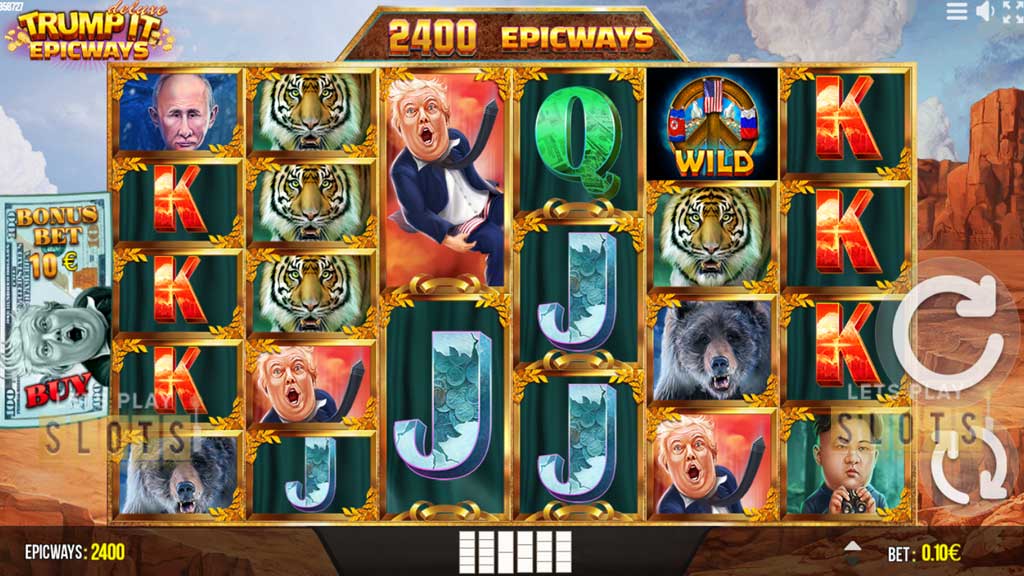 Get Into Dirty Politics With Fugaso’s “Trump It Deluxe: Epicways” Slot 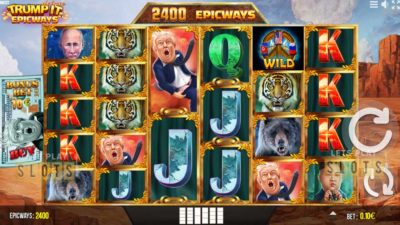 World leaders are the theme of the new slot game from Fugaso. This is not a serious examination of world leaders but more of a satire as caricatures of three world leaders are presented in a bad light. There is no surprise to see who the main leader is in this game, considering the amount of flak he is getting in real time.

U.S President Donald Trump is the main star of this game and is the reason why the game is called “Trump It Deluxe: Epicways“. In this game, Trump and other world leaders are being made fun of in the traditional cartoony way.

The world is compressed and presented to players in the form of a Western style ranch. The background music is a country themed track and it lets players know that world politics at the ranch is going to be a cartoony fun themed event.

The game looks like a Megaways game. Technically, it is one but since Fugaso did not purchase the license to use the name, they can only use the name Epicways to describe the game. There are six reels with variable rows. At its maximum, players will have 15,625 epic ways to get a win.

The game uses a mix of icons. The low-value symbols are the traditional card royals. For the premium symbols, players get to see the presidents of America, Russia and China in satirical drawings. There are also the three animal symbols for the countries: a Bear, an Eagle and a Tiger.

The game has a couple of special features to make things exciting. There are two special symbols. One of them is the Peace symbol, which is the game’s wild. It can substitute for any symbol except for the Eagle Scatter. The Eagle Scatter is the game’s scatter symbol and the way to get free spins.

The free spin feature is triggered when players get three or more Eagle Scatters. The minimum that players can get is 10, while a maximum of 50 free spins is reachable if they get six scatters. Before the spins start, the game randomly selects a symbol that will be expanding for the free spins. Players can also trigger the feature again if they get more scatters during the free spins.

This is a fun little game if you’re a fan of the Megaways format. Do give it a few spins and have fun!

Hurray! There is a competition going between users of our site!
You have to do nothing, but browse out site, and win a daily prize. Click here to read more.
You current ranking:
Time Left: 2h 14m 53s
Gambling is for 18+ though some countries may have other restrictions...Remember you should always Gamble Responsibly
We use cookies to ensure that we give you the best experience on our website. If you continue to use this site you agree to allow us to use cookies, in accordance with our Terms & Conditions.Agree & Close