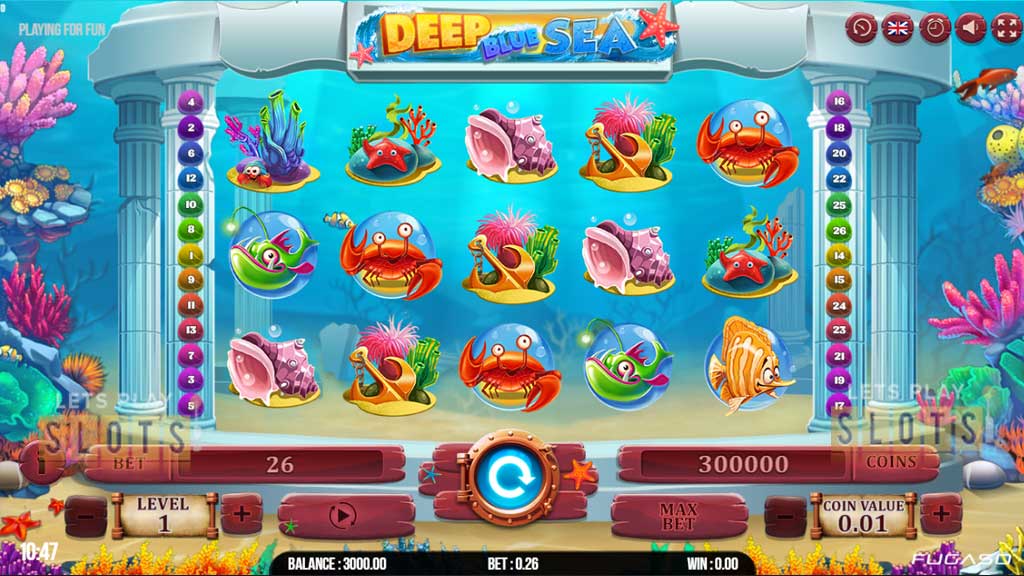 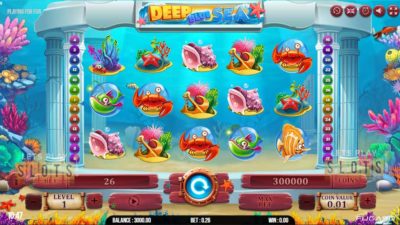 There’s a lot happening underneath the waves in Fugaso’s latest slot game release. The new game is called “Deep Blue Sea” and players are sent to the bottom of the ocean to meet its residents.

Here they will find cute cartoon characters who will help them win special prizes.

This game has five reels and 26 paylines and will be made available at online casinos in the coming weeks. The undersea temple provides the setting for the game and has an excellent animation of a coral reef in the background.

The great thing about Deep Blue Sea is its excellent use of the appropriate symbols.

Players won’t find any out-of-place card symbols here. The winning symbols include tropical fish, crabs, shrimps, starfish, and peal-filled oysters. It even has a unique wild symbols in the form the smiling shark and the puffer fish that reveals multiple wilds. Players can also win big if they get the pirate’s chest which is the game’s bonus symbol.

The animation and music are pretty top-notch. The screen is fully detailed and the backgrounds are animated. The game features a fun BGM with bubbles and gurgles combined with xylophone music. Plus, every winning combination is signalled with a swirl of bubbles.

There are several features that make this game an enjoyable experience. Respins are activated if two bonus symbols appear, allowing for another chance to win. Free Spins happen when at least three bonus symbols show up giving players 10 free spins. During these spins, Walking Wilds is active and the Wild symbols will move to the left and keep moving during respins.

The game is pretty exciting with these features and is considered medium in volatility. With an RTP of 96 percent, there’s a good chance players can come out on top.

Fugaso, which is short for Future Gaming Solutions, recently showcased some of its games at ICE 2019. Some of the games that were featured included ‘Super Hamster‘, ‘Power of Asia‘ and ‘Brave Mongoose‘. All of them are enjoyable games that draw the player in and keep them engaged throughout. The Fugaso game that is currently setting the market on fire is ‘Trump It Deluxe’ which is an immersive slot game.

Fugaso is relatively unknown in the global casino market as the company has only been around for the last three years. However, they have already released over 60 HTML5 video slot games that are supported across all devices. Since 2019 began, the company has been releasing two games per month on average.

Hurray! There is a competition going between users of our site!
You have to do nothing, but browse out site, and win a daily prize. Click here to read more.
You current ranking:
Time Left: 8h 46m 13s