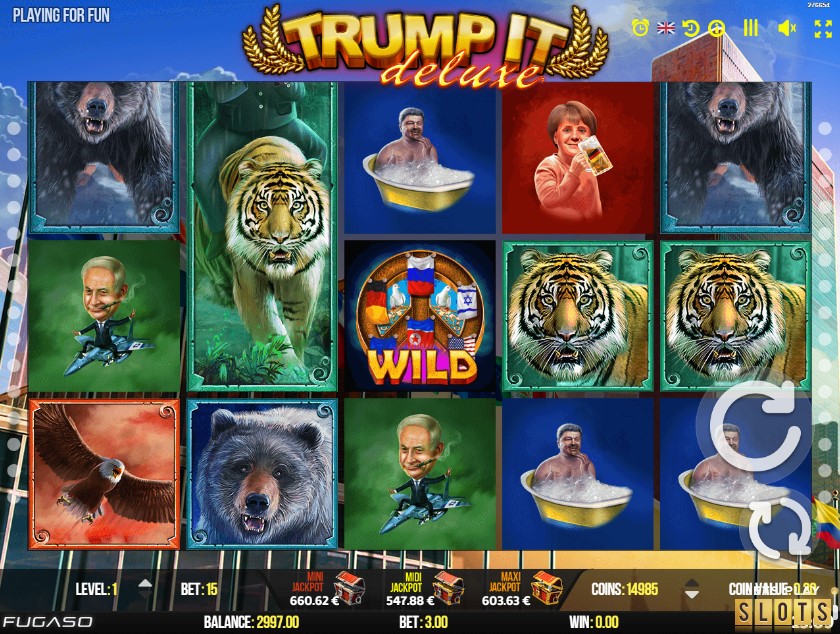 Leave it to Fugaso to create a game with such an innovative theme that it breaches on being mildly offensive to various world leaders. Don’t let that stop you from spinning the reels of Trump It Deluxe, though. It contains Random Wilds, Bear Free Spins, Last Chance and more features!

Best Casinos to Play Trump It Deluxe for Real Money :

I have to admit that I couldn’t not smile when I first loaded this slot game up by Fugaso and saw the symbols on its reels. Poking fun at some of the world’s leaders such as Donald Trump and Vladimir Putin, the game really does entertain from start to finish. And it does all of that while utilising high-quality graphics throughout. Things got even better when I saw that Trump It Deluxe also features a set of progressive jackpots to try and win. 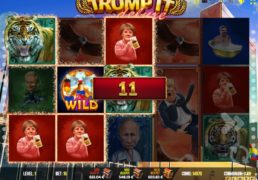 The main game of this slot features five reels and three rows, so everything is quite standard in this area. Across this layout, a total of 30 paylines exist for you to bet on. And speaking of the bets that you can place, you’re able to change such first of all by selecting a specific coin value. Trump It Deluxe features coins between €0.01 and €0.20, while there’s also a bet level to change between one and 10. This means that you can place maximum bets of €30 per spin.

The visuals in the slot are also on the supreme side, with what appears to be the United Nations building in the background. On the reels, you’ll get to see three lower-paying icons of some country leaders, including Angela Merkel of Germany and Reuven Rivlin of Israel. Three animal icons can be seen next, which are the bear, the tiger and the bald eagle, with the latter able to pay out up to 120 times your stake. Three other world leaders standing next to these animals are also present as 3-row large symbols. There’s Putin with the bear, Kim Jong Un riding on the tiger’s back and Donald Trump tumbling from the eagle’s back. He can pay out up to 300 times your bet. 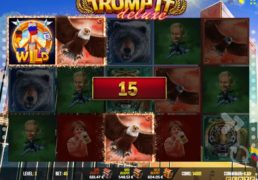 I was very pleased to see that Trump It Deluxe is full of special features, starting with a wild symbol. This one substitutes for all other icons, with the exception of the scatter. What’s more, during every spin in the base game, a Random Overlay Wild feature can trigger. There are three different variations of this, which are as follows:

The slot also features three separate scatter symbols, represented by the flags of Russia, North Korea and the USA. Each of these has its own free spins round attached to it, relating to the animals of each nation. Each free spins round features different symbols and perks on its reels. The rounds out as follows:

One of my favourite parts about Trump It Deluxe, is the Battle round though. This activates if two different scatter icons appear on the reels. One of them will randomly be chosen to transform into the other. This then triggers a re-spin to try and land a third scatter of the same type on the reels. 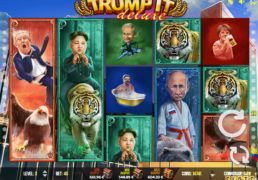 I can’t say enough positive things about Trump It Deluxe. Fugaso has really hit the ball out of the park with this slot game, from its highly appealing graphics to the mass of inbuilt features that it provides and the great soundtrack. Overall, one of the developer’s best game options, in my opinion.

Leave it to Fugaso to create a game with such an innovative theme that it breaches on being mildly offensive to various world leaders. Don’t let that stop you from spinning the reels of Trump It Deluxe, though. It contains Random Wilds, Bear Free Spins, Last Chance and more features!

Hurray! There is a competition going between users of our site!
You have to do nothing, but browse out site, and win a daily prize. Click here to read more.
You current ranking:
Time Left: 10h 59m 35s