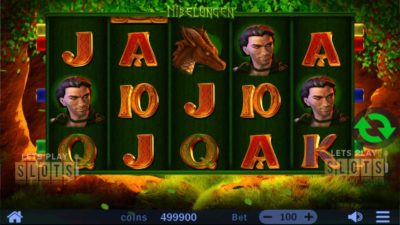 The story of the ring of the Nibelungs is a classic in German mythology. It has inspired various productions from operas to movies. This time around it has inspired Swintt to develop a new slot game titled “Nibelungen“.

In this game, players are taken to the Herman countryside and presented with a 5×3 grid. The designers have done a commendable job with the graphics and the background music adds to the mystery of the game.

The 5×3 grid has five paylines, which is surprisingly low. When it comes to wagers, players have a better setup. Players can wager from $0.05 to $100.

The game has a good mix of symbols. Players can score one of the low-value royals and earn 30x their bet at most. The next level is the various thematic symbols which includes the dragon and Siegfried. Players who score five of Siegfried can potentially get 1,000x their stake, which is a pretty impressive payout.

The special features in this game make things more interesting. They mainly revolve around the golden zweihander symbol. It acts as the game’s Wild and Scatter symbol, which makes it very important. It can substitute as all other regular paying symbols which means it can increase the chances of winning.

But better chances of winning are not the main reason why players will want to score this symbol. If players can score three of the zweihander, players are then given a choice of what sort of free spin feature they want.

If players select the Siegfried feature, they can get from eight to 12 free spins. This depends on the number of zweihanders they score. The low number of spins is because players will then have a Lucky Symbol during these spins. Randomly chosen, these symbols will expand when they land and can even be scored with no connections on the payline.

Players can get more free spins from the Kriemhild feature. Players are given up to 26 free spins. Besides that, they also get an expanding Wild symbol during the spins, which increases the chance of winning.

If you like to try a slot game with a different theme, go ahead and give Nibelungen a few spins.

Hurray! There is a competition going between users of our site!
You have to do nothing, but browse out site, and win a daily prize. Click here to read more.
You current ranking:
Time Left: 6h 4m 39s