Get Down And Dirty With Spinmatic’s “Mafioso” Slot 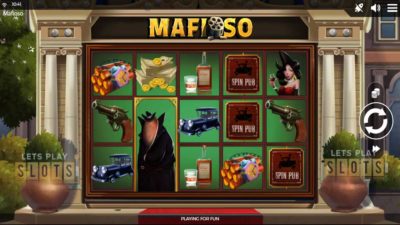 Organized crime is a fascinating topic that has been the theme of multiple blockbuster movies, best-selling books and TV dramas. The Mafia is not a fantasy topic as organized criminal enterprises continue to operate today in many parts of the world. Spinmatic decided to bring this theme to life in its new online slot called “Mafioso“. However, to downplay the intensity of this theme, the developer is using cartoon characters of the Mafioso to lighten things up.

In this game, players are taken to a fancy restaurant where several distinguished guests are meeting. This is no simple meeting either since guards with machine guns are at the door. Spinmatic downplays the intensity with its cartoon-style graphics that it uses to show off the game. This is combined with a nice jazz tune that hints at the mood of the game.

Players will be stopping right in front of the entrance and they will see a grid for play. It is the normal five reels and three rows which is standard with most vegas slot games. For the number of paylines, players will have only 10. The symbols for this game are mostly those that involve organized crime. This includes guns, explosivesband piles of cash.

Players can bet from 10 cents to 40 euros per spin. The game’s RTP is a decent 96.44 percent and combines well with the high volatility of the game.

When it comes to big wins, players will need to depend on two symbols. One of them is the big Mafioso in a trench coat. He’s the muscle of the game and, when he shows up, he takes over an entire reel. He acts as a wild and can appear on the second and fourth reels. Another tough guy that shows up is smaller and he occupies two rows. He also acts as a wild. The great thing about this pair is that they can nudge into position. This means that if they are a bit short, they can move a bit so they completely show up on the reels.

The small guy is the boss and when two of the big guys appear on his left and right, then the big bonuses start appearing. During the bonus game, players can get either awarded cash or free spins. The spins keep on coming until they don’t show up anymore on the reels.

Overall, this is a pretty good game in terms of gameplay and payouts. Do give it a try when it shows up at your favorite online casino. If you looking for more Mafia slot games why not try “Don Corlimone” from Capecod Gaming

Hurray! There is a competition going between users of our site!
You have to do nothing, but browse out site, and win a daily prize. Click here to read more.
You current ranking:
Time Left: 1h 45m 30s
Gambling is for 18+ though some countries may have other restrictions...Remember you should always Gamble Responsibly
We use cookies to ensure that we give you the best experience on our website. If you continue to use this site you agree to allow us to use cookies, in accordance with our Terms & Conditions.Agree & Close