Get Ready To Go On A Quest To Find “Temujin Treasures”

Get Ready To Go On A Quest To Find “Temujin Treasures” 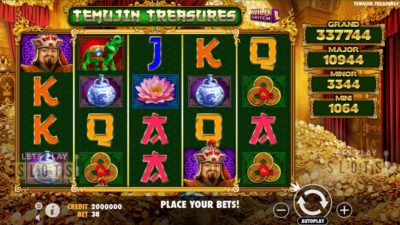 Genghis Khan, also known as Temujin, was one of the world’s legendary and most feared conquerors.

His empire was one of the greatest in the world and he amassed great treasures. Wild Streak Gaming has decided to use this as its theme for its latest slot titled “Temujin Treasures“.

In this game, players are taken to the vault of the great warrior and have a chance at winning something special!

The special vault is filled with lots of gold and various treasures. The grid dominates most of the screen and has five reels and four rows.

There are a total of 1024 paylines which give players a good chance to win. The game’s betting range is interesting. Players can bet from $0.38 up to $190. The higher than average betting maximum should help attract high rollers to the game.

The paytable for this game is a good mix. There are the low-value card royals and the more valuable symbols come in the form of coins, flowers, elephants and vases. The most valuable symbol is Temujin. He can give players 200x their stake when they score five of him.

Players will already know some of the special features. One of them gives you access to four potential jackpots which can make the game even more interesting. They are on full display on the screen when the game is played so players know what to expect.

There are also two special symbols. One is the Wild which is a golden tiger that substitutes for other symbols. It is associated with the Wild Switch feature. If a player has six matching symbols in the three middle reels, they will all become Wilds.

Next, there is the Golden Dragon scatter. Players who land three of them will trigger the Wheel With Free Games feature. Players spin the wheel and they have a chance at up to 50 free spins and one of the jackpots. There is even a chance at instant cash prizes. The great thing about the wheel is that it won’t stop giving players a spin until they get a minimum amount of free spins.

The free spins themselves are special. Players get additional symbols to make the game exciting. They come in the form of firecrackers and can give cash prizes or more free spins. The high RTP of 96.55 gives you more incentive to spin the reels on Temujin Treasures.

Hurray! There is a competition going between users of our site!
You have to do nothing, but browse out site, and win a daily prize. Click here to read more.
You current ranking:
Time Left: 4h 41m 57s