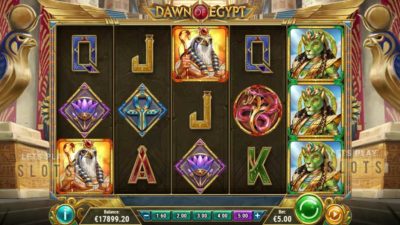 One of the favourite themes amongst slot developers is Ancient Egypt. The historical era has many interesting stories that are filled with lost treasures. Many mysteries surround the era and Play’n GO has decided that it is time to introduce another Egyptian themed slot called the “Dawn of Egypt” slot.

The game may be new but players will immediately recognise the touches that Play’n GO uses in most of its slot games. Players may be familiar with the Egyptian theme but the company makes it better through its unique approach.

Players are taken to a temple at the base of the pyramids to make their mark on the game. There are five reels and three rows in their grid. The game features a simple set of 10 paylines which players should be familiar with.

The symbols used are also the ones most associated with the theme. The game has the basic card royals for its low-value symbols. Players also have the more valuable lotus flower, Ankh, scorpion, snake and the gods Bastet and Horus to aim for. The most valuable one in the game is Horus, who gives out 100 times a player’s stake when people get five of it. The game also has a scarab acting as the wild which also gives out the same prize.

The game has a pretty decent RTP of 96.23 percent so it should be good enough to get slot players to give it a spin or two.

What sets this game apart is the additional features. The main one is its interesting Free Spins features. The game initially offers free spins for scoring blue pyramid scatter symbols. Besides offering free spins, the scatter also gives a good payout. Players who score five of them will get 1,000 times their original stake.

When players begin their free spins, they will spin the Wheel of the Gods first to figure out how many spins they get. The maximum amount of spins that players can get is 20. Besides that, during free spins, all low-value symbols will transform into one specific high-value symbol. This will make wins easier. There will also be wild scatters during the free spins to add more free spins.

Overall, this is a fun little game and is a match for the other Egyptian slot offerings out there!

Hurray! There is a competition going between users of our site!
You have to do nothing, but browse out site, and win a daily prize. Click here to read more.
You current ranking:
Time Left: 3h 23m 29s