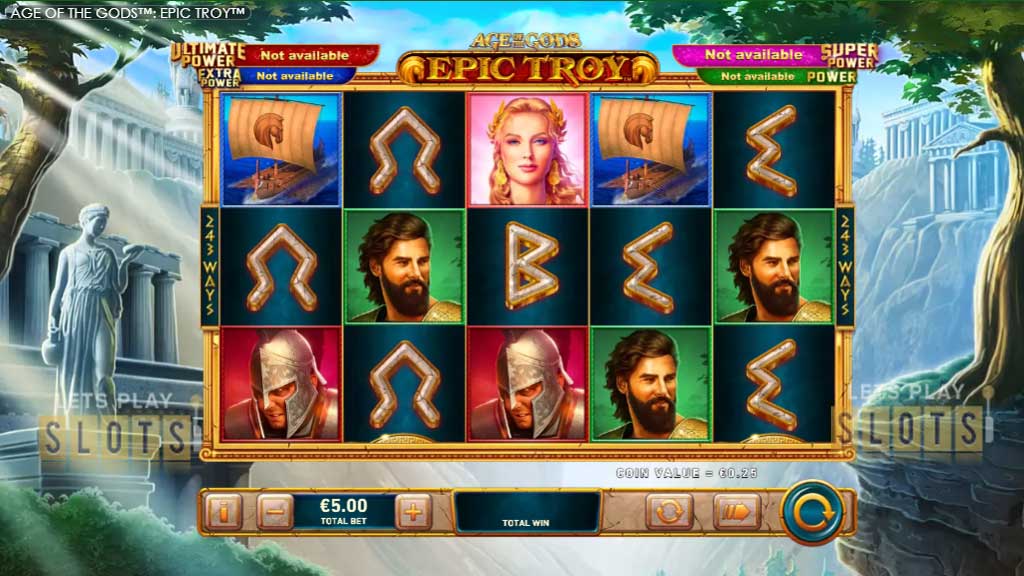 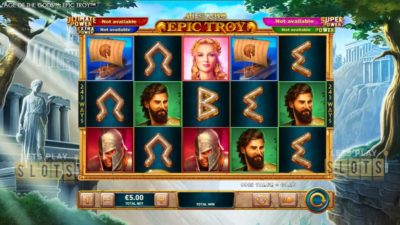 The Age of the Gods series is one of Playtech’s big hits. The developer has released slots covering a number of famous Greek Gods and its latest release focuses on Troy. In the “Epic Troy” slot, players are taken to the middle of the Trojan War.

As part of the Age of the Gods series the last release was “Ruler of the Seas“, players are treated to the same visual expertise in Epic Troy. Ancient temples are in the background and all the artwork looks great. The game features five reels and 243 ways to win, which gives players a decent chance to win.

Epic Troy features special symbols instead of the usual card mix. The low-value offerings are the Alpha, Beta, Omega and Zeta symbols. There is also a ship symbol that represents the Greek ships. Finally, three character symbols represent three important figures from the Trojan War. There is Achilles, Paris and Helen of Troy herself.

Helen is the most valuable symbol among the set. Players who score her with five symbols will be able to get 2.5 times their stake. Besides that, she and the two other character symbols have the chance of appearing as a full-stack. The game also features a wild symbol that can act as all symbols except for the shield scatter symbol.

Epic Troy has three special respin features. They depend on the characters that show up. Players who score two or more full Helen stacks will be able to get the Helen Respin Bonus feature. This gives players three bonus respins, with new Helen symbols being locked in place. Players who manage to fill the reels with Helen symbols will score 607.5 times their stake.

The Paris respins work similarly but only offer two respins. Players don’t have to fill the reels but only a block of three or more symbols, with the biggest reward at 150 times their stake. The Achilles Respin only give one respin but all Achilles symbols become wilds.

Finally, the game can give players six free spins when they score three or more shield scatter symbols. During these spins, only high-value symbols are present. There is even the Age of Gods Jackpot game that it shares with other Age of Gods games. Overall, this game is fun and the RTP of 96.5 percent makes it an attractive game to play.

Hurray! There is a competition going between users of our site!
You have to do nothing, but browse out site, and win a daily prize. Click here to read more.
You current ranking:
Time Left: 2h 3m 16s