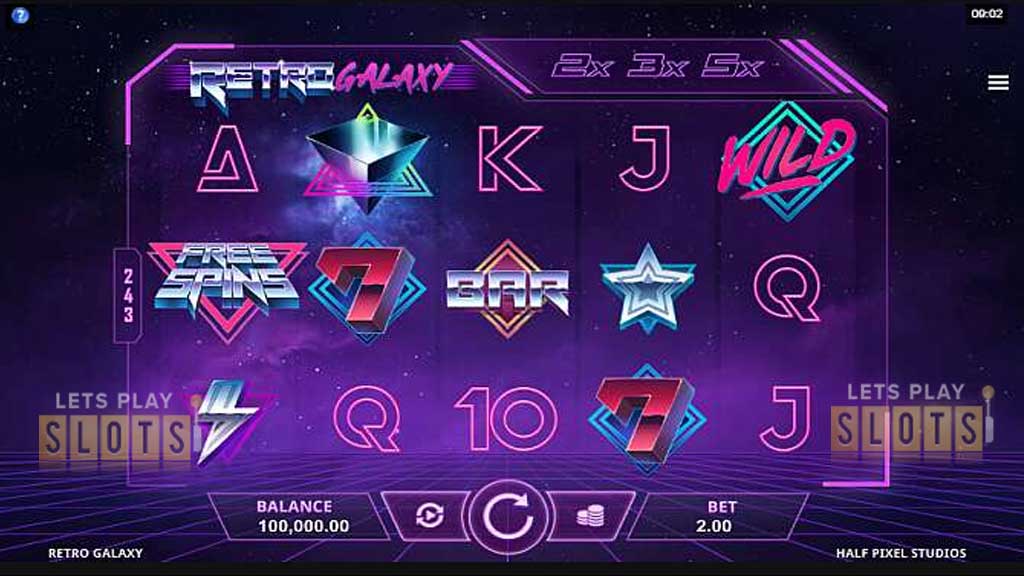 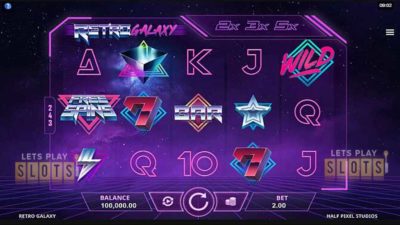 Half Pixel Studios has taken the video games that have been around since the late 1970s and given it a new twist in its latest slot released titled “Retro Galaxy“. Developed with the help of Microgaming, players get to experience a classic video game but with a modern touch to it.

Players who start this game up will be greeted with a purple background and a stylish palette. Though the game does not have a space background, it does make up for it with its retro-future style. The music is electronic and adds to the modern twist.

The game features five reels and three rows. There are 243 paylines to try and win on. The game has the usual set of symbols. The special symbols are throwbacks to traditional slot symbols. The betting range for this game is a bit limited. Players can only wager from $0.20 to $20. That doesn’t sound much but the game is highly volatile. Lucky players can win up to $146,000. This game has an RTP of 96.05 percent.

To start with the special features, the game has an auto spin button. This is for those who get tired of clicking the button all the time. Players can set it to spin from five to 100. Players can also set win and loss limits that can trigger an auto-stop.

As for gameplay, it has a couple of interesting features. For one, the game has Wild symbols on all the reels. It substitutes for all symbols except the scatter. This makes it easier to win. The game’s scatter symbol allows players to get free spins. Players can get 10, 15, or 20 extra spins. This depends on how many scatters the player scored. The number starts three and goes up to five. Players who score the scatter symbol during the free spins can get five more free spins.

The game also has the Rolling Reels feature. It removes the winning symbols and allows for more symbols to drop from above. This can potentially lead to consecutive wins. Multipliers are also available. Players who win can build them up so that players can get massive bonuses.

If you have never played a classic video game, you need to have a few spins with Retro Galaxy.

Hurray! There is a competition going between users of our site!
You have to do nothing, but browse out site, and win a daily prize. Click here to read more.
You current ranking:
Time Left: 8h 8m 13s