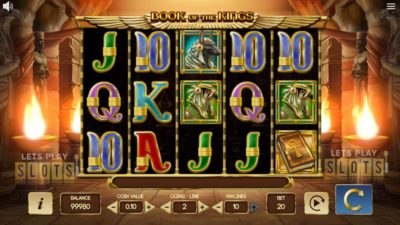 Spearhead Studios has decided to bring back their favorite character, Lara Jones! Lara is a mix of Lara Croft and Indiana Jones and is searching for treasures in this game which is titled “Book of the Kings“. Players will join Lara Jones on an treasure hunt and see if they can walk away with some of those treasures.

Since Lara Jones is a cross between Lara Croft and Indiana Jones, it is not surprising to see her in the midst of tombs which have fires all around them. Players will be accompanying Lara as she hunts down clues to the treasure. The graphics are great and the sound effects will keep players alert for clues.

This is an Egyptian theme slot which is evident from the various decorations and symbols of the game.

As for the gameplay, Book of the Kings has five reels and three rows. Players will have 10 paylines to work with. While the payline count is low, the RTP is pretty good at 96.4 percent. Players can wager from 0.01 to 100.00 per spin. That is pretty good range given the fact that the game is also highly volatile and can let players win big amounts on a great spin.

The game’s symbols are a mix of the card royals which are the lowest paying symbols. However, they can still give out 150x, if five of a kind are scored. The high value symbols come in the form of different treasures. The most valuable symbol is Lara Jones as getting this symbol can give players a 10,000x payout.

The game does have a couple of special features. They are based around the Book of the Kings symbol. It acts as both a wild symbol and a scatter symbol. Players who score it like a wild can get up to 500x their stake.

Players will also be interested in the free spins feature. They will need to score at least three of the Books to get 10 free spins. When the spins start, the game selects a random symbol and it becomes an expanding symbol for the duration of the spins. This should allow for some really big wins. There is also the Gamble feature which will allow players to go double or nothing as long as they guess the card color right.

Overall, this is a simple game that provides players with both excitement and a decent payout.

Hurray! There is a competition going between users of our site!
You have to do nothing, but browse out site, and win a daily prize. Click here to read more.
You current ranking:
Time Left: 17h 4m 7s