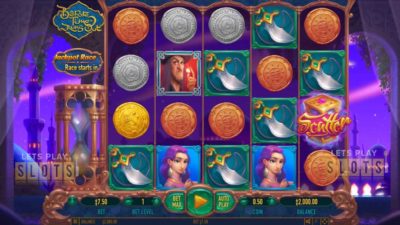 Habanero is taking players to a setting that resembles the tales of Thousand and One Nights for some slot game action in their new “Before Time Runs Out” slot.

In this game, players are battling the traitorous Vizier in a rich setting filled with mystical intrigue. Players are taken up to a palace balcony to see the palace in all its glory. The music matches with the graphics to get players into the mood for this Arabic-themed slot adventure.

As for gameplay, the slot has an interesting grid of five reels and four rows. Interestingly, there are no paylines. Players win by matching symbols horizontally or vertically. One drawback with this slot is that bets are limited from $0.15 up to $45.

That is lower than normal and while the game can offer a max payout of 66679x, it still limits the amount of money to be won. High rollers will likely skip this game because of the low betting range.

Instead of the usual card royals, players have three different coins to score. Then there are the thematic symbols which includes the Vizier, the sword, the Princess and the Prince. The game also has two special symbols. One is the Wild, which is a green ball with Wild on it, and then there is the Scatter, which is a simple magic box. Of the regular symbols, the Princess is the most valuable with a prize of 167x with a five symbol combo.

The game has some special features that make it a lot more fun. For one, the wild symbol only appears on reels two and four. It can replace any symbol with the exception of the scatter. Next, there is the duel feature. This happens when the Prince symbol appears on the first or last reel and the Vizier appears in one of the middle reels. The Prince then moves beside the Vizier to duel him.

What happens is that if the Prince wins, up to three Wilds can appear. If the Vizier wins, the Prince symbol will not appear again for some time. The game also offers free spins. Players simply need to score three or more scatters. Players then can get from 10 free spins to 50 free spins.

The game also has an hourglass. Every duel that ends with a Prince winning, gives players a jewel. If players score six gems, then they get the biggest prize in the game. This game has an RTP 96.68 percent.

Hurray! There is a competition going between users of our site!
You have to do nothing, but browse out site, and win a daily prize. Click here to read more.
You current ranking:
Time Left: 52m 56s