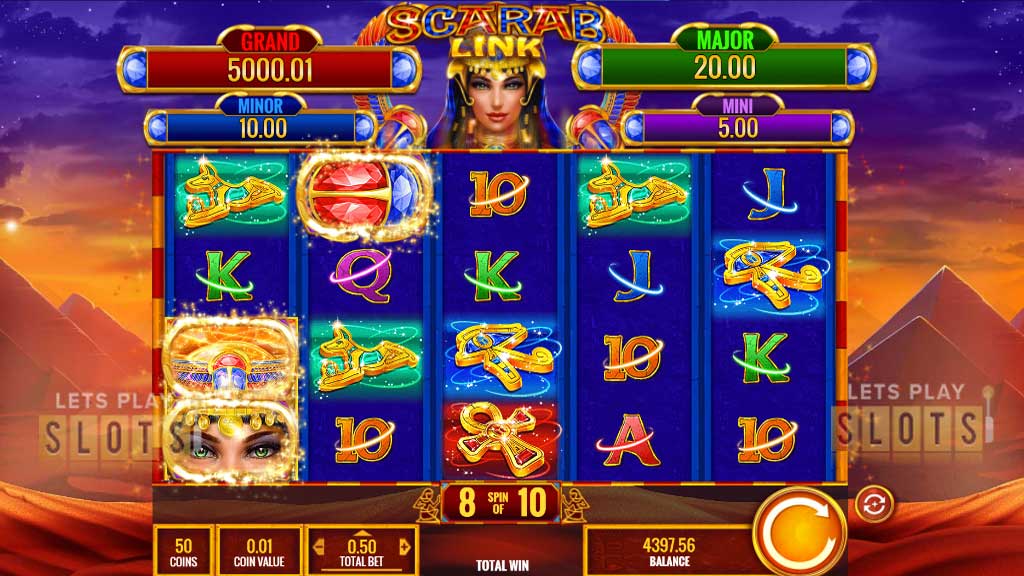 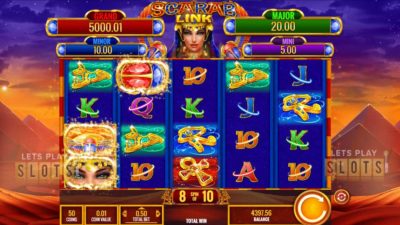 There is no shortage for Egyptian themed slots in the market as players continue to be fascinated with Egyptian mythology in slot games.

IGT has decided to come out with a new Egyptian themed game titled “Scarab Link“. The game takes players to the desert, with a sunset falling on the pyramids in the distance.

The game’s main grid takes center stage and displays five reels and three rows which is pretty standard. What is not standard is the high amount of paylines as the game offers 50 paylines to work with. This game also has a pretty high RTP of 96.25 percent which is higher than average and should encourage players to try it out.

Players are allowed to wager between $0.25 to $25 per spin. That is a pretty limited betting range and will not attract the usual high rollers. But the low minimum should help control spending and prevent a lot of players from exhausting their bankroll quickly.

The card royals are the low paying symbols in this game while the Egyptian themed symbols pay out a higher amount. These symbols include a dog, a lion, a Pharaoh, a bird, the eye of Horus, an ankh and the beautiful Cleopatra. The game has two special symbols. One is a blue and red beetle that transforms into a Wild symbol while there is an actual Wild symbol in play. The most valuable of the symbols is Cleopatra and she offers 100x for scoring five of her on a payline.

There are a few special features in this game. One of them keeps track of how many spins a player has made. The game operates on a cycle of ten spins. During this period, players have a chance to collect golden frames. These are left behind when a scarab lands on the reels. At the end of the ten spins, all the golden framed symbols become Wilds.

Additionally, the game has a Hold and Respin bonus. This happens when players score three Link Beetle symbols. Players then get to play with blank reels and the initial three symbols get locked. They now have three respins to add to those initial symbols. A successful addition resets the respin counter back to three. The bonus round is over by either filling up the entire grid with the symbols or not scoring more symbols. Players either get the full jackpot or the total amount of beetles.

The game also has a progressive jackpot that players can randomly trigger and win if they get lucky. If you like Egyptian themed slots, go ahead and give the Scarab Link a few spins.

Hurray! There is a competition going between users of our site!
You have to do nothing, but browse out site, and win a daily prize. Click here to read more.
You current ranking:
Time Left: 5h 13m 37s