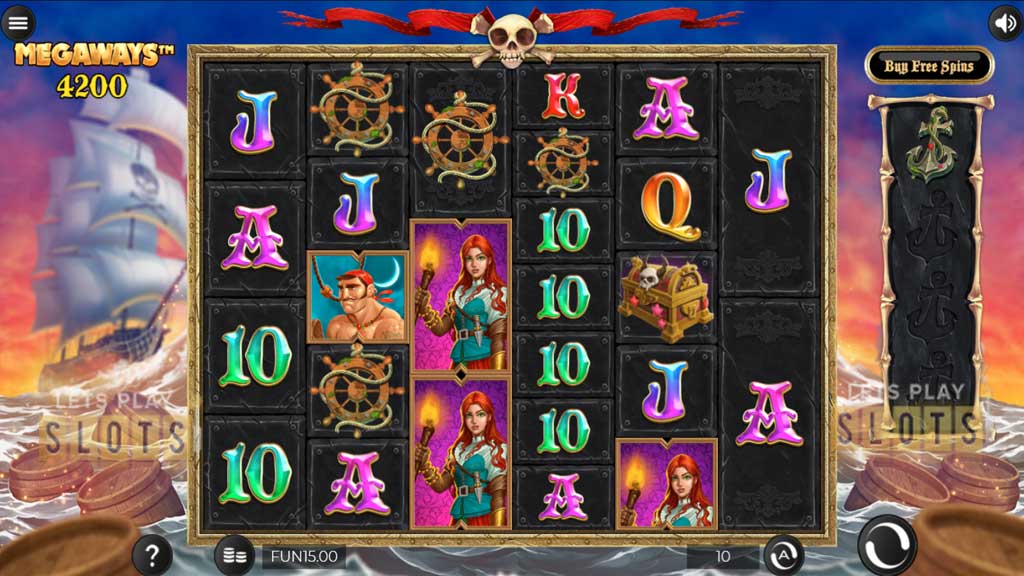 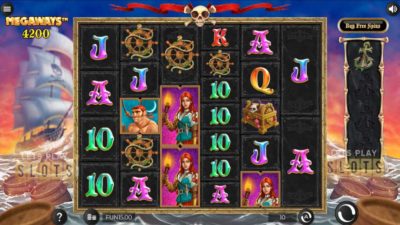 There are many who think that Pirates operated only in the ancient days. That’s not true as there are still a lot of pirates operating especially in Somalia waters. Now, players from all over the world will have a chance to see how Pirates live their lives with the new “Pirate Kingdom Megaways” Slot.

When players start this game, they will immediately be confronted with the obvious theme.

A pirate ship is sailing in the background as barrels float in the waters. Players have six reels and up to 117,649 ways to win. Though the game has the basic A, K, Q, J and 10 royals, players will want to score the fancier symbols.

These include the ship wheels, treasure chests and three character pirates. The most valuable of these symbols is the pirate captain. Players will be able to get 25 times their stake if they get six of him in the combination.

Besides these symbols, the game features two wild symbols. There is the ordinary two pistols symbol which acts as the basic wild. This same symbol can also appear but with an additional x2 multiplier. Players can land multiples of this, racking up and an incredible number of points.

The game also has some very special features. For one, there is the use of the Megaways engine. Each reel will have between two to seven symbols. Each win adds more symbols to each reel. When fully revealed, players have a maximum of 117,649 Megaways to use to win.

Besides adding more symbols, the game also has the Tumbling Reels feature. Winning combinations disappear and new ones drop down. The result is that players have a potential chance of getting consecutive wins.

The great thing is that after four consecutive drops, the Free Spins feature is triggered. Players get eight free spins and an additional two free spins for every additional drop. There is a maximum amount of 22 free spins to be earned. During these free spins, reels that already have seven symbols will lock. This ensures that you get a certain number of chances to win. Furthermore, consecutive wins during free spins will net you more free spins. There are no limits to this, so you can keep getting more free spins.

Iron Dog Studio has done a great job with this game and certainly deserves a spin or two.

Hurray! There is a competition going between users of our site!
You have to do nothing, but browse out site, and win a daily prize. Click here to read more.
You current ranking:
Time Left: 55m 2s