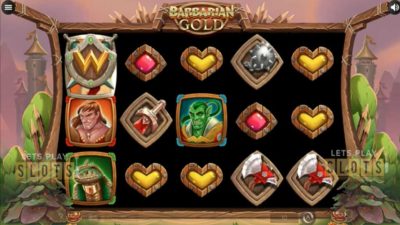 The term barbarian is hardly used anymore in the 21st century but the folklore surrounding barbarian tales and barbarian movies continues to do the rounds. Iron Dog Studio is keeping that tradition alive with its latest slot titled “Barbarian Gold“.

This new slot brings in graphics and storylines featuring a wild barbarian along the lines of the popular Conan the Barbarian as well as an adventurous and wild spirit. Players will enjoy this theme and the interesting gameplay.

When players start this game up, they will immediately get to see the heroic barbarian. The game uses comic book-style graphics to depict how the barbarian acts and has a great soundtrack to set the scene.

Iron Dog decided that they would use a five-reel, three-row layout for the game Players will have 20 paylines to play with. The graphic design of the reels is based around shields. The lower value shields have heart, diamond, club and spade symbols. For more valuable wins, players will want to score one of the clubs, axes and swords. There are even various characters like the ogre and the barbarian.

Players can wager up to £/€20 per spin. Players can also bet at lower amounts and just let the gameplay itself with the autoplay button. The game will then spin up to the number of spins that the player specifies or until a win happens. Players will want to score the barbarian to win big, which can give 12.5x a player’s stake. The basic game alone will give players up to 500x their stake with the current multipliers. This game has an RTP of 96.3 percent.

But the real draw of the game is in the special features. With the right mix of multipliers, players can get up 10,000 x their total stake. For one, the game allows for expanding wilds. The shield with the W is the game’s wild and if it appears on the top row, the entire reel becomes wilds. With multiple wilds in play, players can have multiple wins in no time. It helps that each expanding wild can also apply a multiplier

The game also has free spins. The skull scatter can give up to 12 free spins and starts the Lava Cave bonus game. If players score three or more scatters again, they go on to the Gold Cave. Here, more multipliers are applied.

Overall, the Barbarian Gold is fun and adventurous slot which deserves a few spins!

Hurray! There is a competition going between users of our site!
You have to do nothing, but browse out site, and win a daily prize. Click here to read more.
You current ranking:
Time Left: 5h 14m 17s