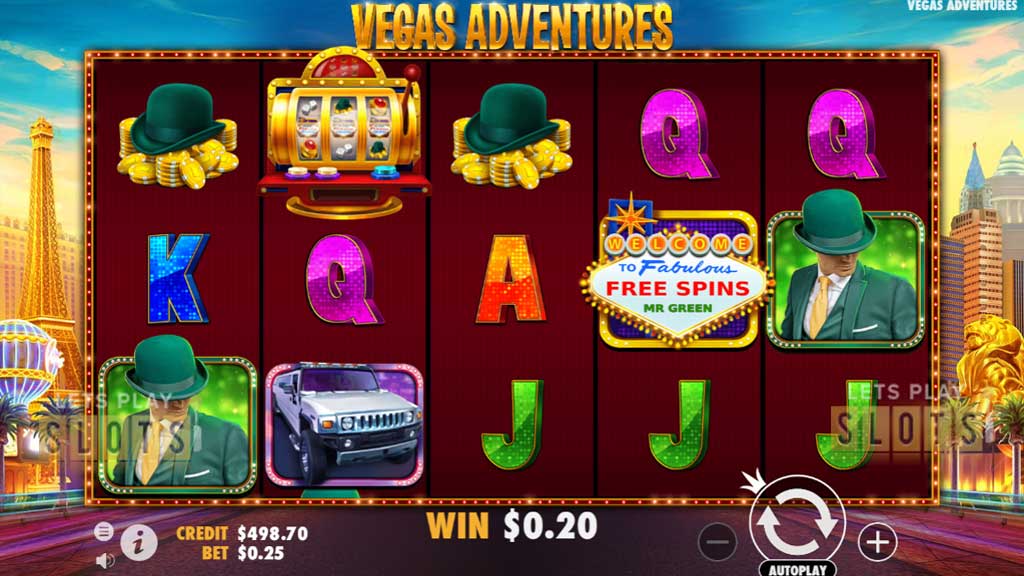 Join Mr Green On Trip To Nevada With “Vegas Adventures” 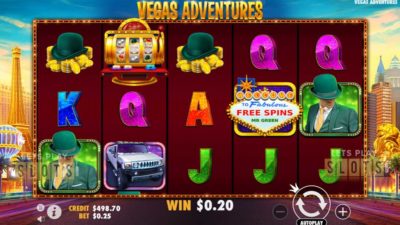 In this new game, Mr. Green has decided to take a trip to Las Vegas and he is taking players for a wild ride down the strip. Those who join him will have a chance to win some major prizes.

This new slot features five reels and 25 paylines and can be found exclusively at Mr. Green Casinos.

One of the first things players will notice is that the design of the game is a bit understated.

Unlike other Las Vegas games where everything is flashy, players are treated to a classy view of the hotels and casinos. The only decorative thing are the symbols which come across as a bit flashy.

The low-value symbols are the standard A to 10 royals. There are also high-value symbols that will reward players with higher prizes. This includes dice, a clip full of cash, casino chips and a stretch limo. The most valuable one though is Mr. Green. Players who get five of him in a combination will receive a payout 20 times their total stake. The game even has a wild symbol that replaces for all standard symbols.

Bonuses to Aim For

When you play slot games, you are aiming for the bonuses. For this game, you can trigger the main one by scoring the game’s scatter symbol. It comes in the form of the famous Welcome to Las Vegas sign. It only appears in the three middle reels. If a player gets all three on a payline then they trigger the game’s Free Spins feature.

Players will get ten free spins. During these free spins, golden ring symbols can be found on the reel. Every time one of them lands, a point is awarded to players. Depending on how many rings are scored, players get additional Mr. Green symbols added to the reels. It scales up from three extra Mr. Green symbols to 11 for those who get 15 gold rings or more.

Scatters can also get players an additional two more free spins to their game. This has no limit so lucky players can keep on spinning for a long time.

This game is all about elegance and can be played at a rather relaxed pace. Those who like Mr. Green, should give this new game a try and see if they can come out on the lucky side.

Hurray! There is a competition going between users of our site!
You have to do nothing, but browse out site, and win a daily prize. Click here to read more.
You current ranking:
Time Left: 10h 33m 22s