Venture On A Treasure Hunt With “Griffin’s Quest” 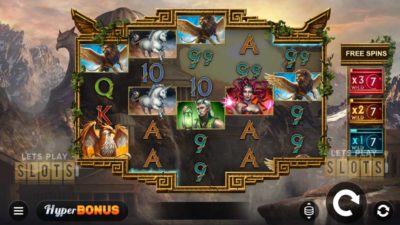 There are dozens of mythical creatures that have made it to the movies and story books. Greek mythology is particularly rich with these mythical creatures. Kalamba Games has taken most of these popular Greek mythical characters and filled their newest offering titled “Griffin’s Quest“. For players who want to experience a treasure-filled adventure, this game has it all.

Players will see a vast valley filled with temples and a griffin nest in prominent display when they start this game up. The grid will dominate the screen, but the background image will still be visible. The singing voices in the background will get players into the mood for myth and adventure.

The gameplay is a bit weird since the grid is not a standard one. Instead of straight lines, the grid is in a 4-5-6-5-4 layout. This non-standard layout allows for 2,400 paylines. Though this may seem like an easy win, the game has a high variance. This means that players will get to win quite a bit but small they will be small wins only. To expect the big bonuses, players will have to wait. But it can be worth it since the biggest prize that the game has is 26,000 times a player’s stakes.

The game’s symbols are a mix of the fantastic and the ordinary. The low-value card symbols provide only small wins. The various mythological creatures like the griffin, the medusa, and more are there to provide the big wins that people are looking for.

The game does have a main bonus symbol. It is a simple logo with the word “Bonus” on it and it is the key to the various special features of the game. For one, every time that it appears, a bonus meter on the side collects them. But it gets really special when three of them are scored as part of a winning combination. This is when players are awarded cash wins, multiplier wins, or even bonus spins.

The meter on the side determines the type of bonus spin the players get. Depending on which meter is filled up, that is what they will get. Basic bonus spins are the easiest to claim. But players can get bonus wins with multipliers. They can be awarded if the player is lucky. There are even bonus spins where stacks of symbols show up, instead of basic single symbols. This allows for easier wins.

Overall, this is a fun little game and deserves a few spins.

Hurray! There is a competition going between users of our site!
You have to do nothing, but browse out site, and win a daily prize. Click here to read more.
You current ranking:
Time Left: 6h 0m 2s
Gambling is for 18+ though some countries may have other restrictions...Remember you should always Gamble Responsibly
We use cookies to ensure that we give you the best experience on our website. If you continue to use this site you agree to allow us to use cookies, in accordance with our Terms & Conditions.Agree & Close