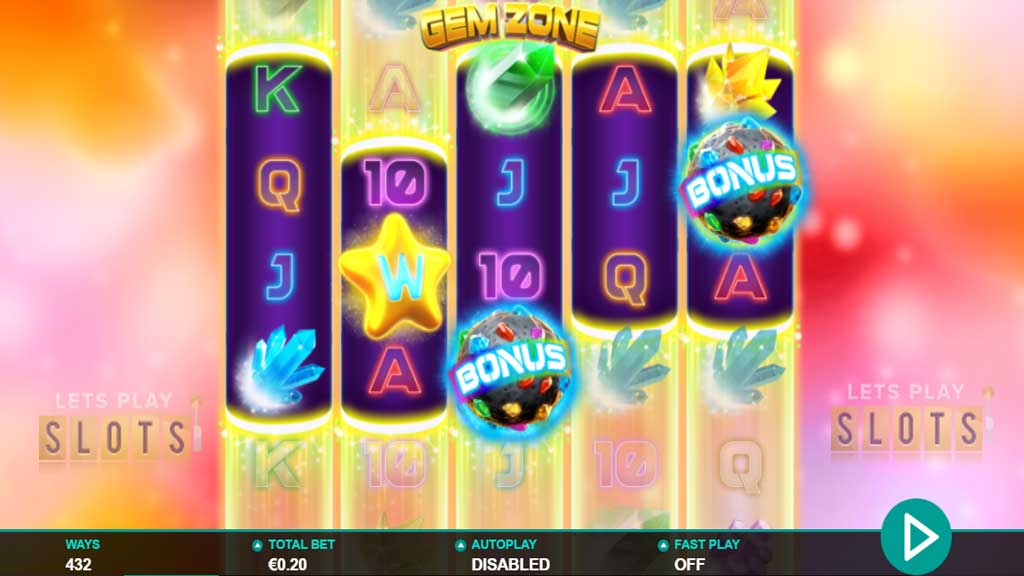 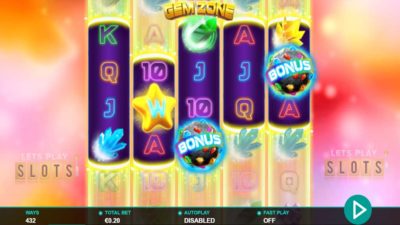 Slot developers are constant experimenting with different themes to give their players interesting games and to bring something new to the market. Leander Games has come out with a new offering called “Gem Zone“.

In this game, players will be playing around with gems combined with an electro soundtrack. The graphics are excellent in this game and so is the gameplay which will keep players intrigued from start to finish.

When players start this game up, they will be immediately taken up with the amount of colours involved. There are five reels and 243 ways to win initially. The symbols themselves are a mix.

The low-value 10 to A royal symbols are available in a variety of colours such as yellow, green, red, blue and purple. There are also five gems with the same colour that have a higher value.

The most valuable symbol of them all is the red gem. Players who get five of them will receive three times their stake. Besides that, there are two special symbols. One of them is the gold star which acts as the wild. It substitutes for most other symbols except for the scatter. The scatter symbol, on the other hand, is the Bonus symbol. It is the only way to trigger the game’s special feature.

The simplicity of the game extends to the special features. The most obvious one is the Dynamic Ways engine. Players will have a way to add to the paylines and the rows available. If they succeed, the game will have five rows and 3,125 ways to win. That’s an incredible number of paylines, which significantly increases the chances of winning.

The bonus feature is called the Next Dimension Free Spins Bonus feature. The Bonus symbol needs to appear in three reels on the same spin. Players then get 10 free spins and get to play them on a special expanded six-reel screen.

The bonus feature also has more rows, up to seven. This results in an increasing number of ways to win. Players will have up to 117,649 ways to create a winning combination, which can go a long way with ten free spins. Additionally, players will be able to get more free spins if they score another set of bonus symbols. If they are lucky enough to keep scoring these, they can get unlimited free spins.

Overall, Gem Zone is a fun little game with high volatility that players should enjoy!

Hurray! There is a competition going between users of our site!
You have to do nothing, but browse out site, and win a daily prize. Click here to read more.
You current ranking:
Time Left: 13h 14m 54s
Gambling is for 18+ though some countries may have other restrictions...Remember you should always Gamble Responsibly
We use cookies to ensure that we give you the best experience on our website. If you continue to use this site you agree to allow us to use cookies, in accordance with our Terms & Conditions.Agree & Close