Listen In On The “Carol Of The Elves” This Christmas 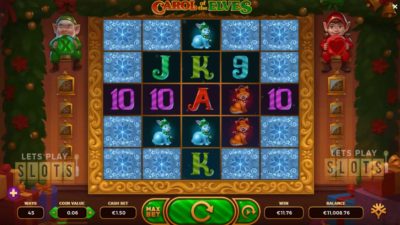 In this game, players are taken to a cozy little room where they get to play slot games under the eyes of a pair of elves. Combined with a fun soundtrack, players will have fun enjoying this low key slot.

Players are presented with an interesting grid layout when they start this game. Instead of the normal rectangular grid, they see a 1-3-5-2-1 layout. The difference is that every time a player wins, parts of the grid are added.

While the amount of paylines is limited to 45 in the beginning, a fully-revealed grid will have 3125 paylines. Combined with a 96.2 percent RTP, players will have a decent chance of winning.

Players will be able to wager from $0.10 and up to $150. The low initial wagers are perfect for those who are beginners while the higher bet maximum is great for high rollers who are looking to take the risk and win big.

The game’s symbols consist of a nice mix. They are six low-paying card royals. Then there are the thematic premium symbols that include polar bears, cats, rabbits and reindeer. Players can potentially win up to $3,000 on a lucky spin.

The game has some nice features that can make things very interesting. The main one is the respin feature. This is what allows for all the blocked tiles to be revealed. Players who get a winning combination will see revealed tiles. It all depends on the number of symbols in the winning combination. So three winning symbols mean three tiles unveiled. With 12 blocked tiles, players will need several wins in succession.

After the tiles are revealed, players get another spin. If they win again, more tiles are revealed and another spin is given to them. If they lose, the symbols are reset. Players who fully remove all of the blocking tiles will see one of the meters on the side filled. This can potentially either give multipliers or another respin. The game has no wilds or scatters so players will be mainly focused on the respin feature.

Overall, the game is fun and definitely worth a few spins during the Christmas season.

Hurray! There is a competition going between users of our site!
You have to do nothing, but browse out site, and win a daily prize. Click here to read more.
You current ranking:
Time Left: 1h 5m 32s